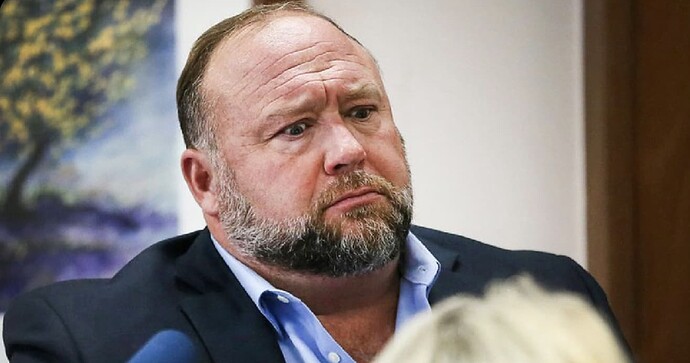 Nah that wasnt a mistake.

They must be sick and tired of his bullshit too.

Gonna be wild seeing that all in the J6 investigation.

Nah that wasnt a mistake.

So far not looking like a mistake lmao. I’ve seen mixed takes on whether the defense counsel attempted to do anything about it after the fact when he had the chance.

Any lawyer representing Jones is a meat helmet with a law degree.

These aren’t very smart people to begin with. Johnny Cochrane knew what he was doing. There was some doubt there.

But These JD twits wanted to own amateur hour, and boy, when you lose your client $50M, you’re done.

The again, they do say “he that represents himself in court has an idiot for a client”

And that’s a tough pickle, given Florida. Anthony fucking Sabatini. This guy represents an entire district and is running for Congress, and believes Florida should go to war against the fucking Republic itself.

I’ll never get how these weenie men are able to command votes.

I’ll never get how these weenie men are able to command votes.

Oh look, another nutty Trumpette just smoked himself on the Capitol lawn.

Apparently, they all now believe the FBI is the Gestapo.

Thank Alex and all the Texans that suck up his jazz. And cry for Florida, they are next.

Meanwhile armed, masked Trump supporters are advancing on the FBI in Phoenix.

Another one is Security Division.

Into believing things like what exactly? Are we talking about the same agency that shot a woman in the head and then taunted her husband about it?

The IRS under the Obama administration was found to have serially targeted certain non-profits and certain groups for political reasons, particularly conservative groups, like the Tea Party, and also some fringe Left groups, that were outside of the Democratic Party mainstream.

Not to mention, throughout the FBI years, under its founder, J.Edgar Hoover, the FBI serially targeted political dissidents, for investigation, in attempts to discredit them, and/or have information with which to black mail them, a notable example being the FBI’s targeting of Dr. Martin Luther King.

The FBI did behave in very questionable ways regarding the first Trump campaign.

And, the FBI has a habit of losing evidence in a serial pattern, that is concerning:

The FBI seems to either have a competence issue, or integrity issues with members of their agency who may be sympathetic to the Democratic Party, with regards to performing their duties in an unbiased manner.

I used to work for the US government. They are most definitely out to get people lmao.

The FBI seems to either have a competence issue, or integrity issues with members of their agency who may be sympathetic to the Democratic Party, with regards to performing their duties in an unbiased manner.

OR, they’ve gotten their asses kicked by the Marxists.

This is a much broader problem with the US.

Absolutely everything is political and has to be either one side or the other.

Now you have the left screaming to defund the police and the right defund the FBI.

What an absolute shit show.

They are most definitely out to get people lmao.

That’s exactly what the Elites want you to think

That’s exactly what the Elites want you to think

FBI aren’t “elites”, it is part of the administrative state and it’s filled with a mix of middle class white collar theater kids and Mormons. Bruh I’m telling you from first hand experience from the side that was out to get people.