This Parasite Needs to Go 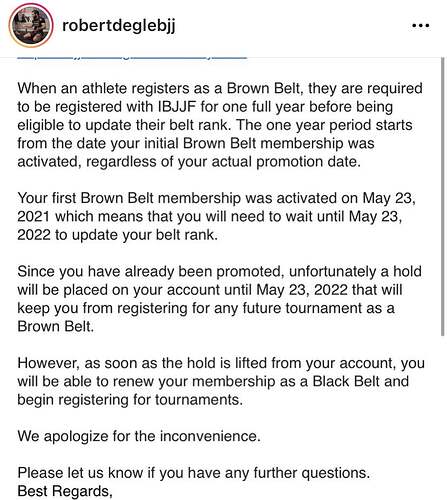 I think its obvious now that its a way of life for him. Carlos Gracie Jr is a full time scammer that causes you career issues using paperwork HE wrote and then sells you solutions. Its gross and we should have removed him. You let Oden fool you and let martial arts most prolific scammer get away with it and continue. Most scammers are at least only operating in their dojo. This piece of shit is operating globally.

Have you checked the terms and conditions to see if the claimed administrative issue is true?

Also they did apologise for any inconvenience

The terms and conditions of BJJ don’t state you owe Jr shit. He just sorta lurks and fucks up your promotion.

I’m not educated on BJJ politics, but if one signs up to an organisation, one is bound within the terms and conditions of the organisation

Is it you that had been inconvenienced?

I was NOT a member, but their organization came into my dojo looking to extract money.

In this case its another victim though. Basically he says 'Your money or your rank." and then gets abusive if you refuse. If I’d known he was such a parasite I’d have honestly dumped his agent into the river. A BB takes over a decade and tens of thousands of dollars to earn, so tainting it to steal some money is a life altering crime. It’s FRAUD.

Yes, and those terms were not there. It’s fraud. If we’d all signed contracts handing over cash and belts and such, he’d use a lawyer to collect, not an angry mob. The scam works with him dropping this on you before or after promotion, a decade+ investment, and thinking you’ll fold not to ruin your sunk costs.

At the very minimum it sounds like some sort of attempt at an extortion racket. He had no right to take anything from you. On the other hand, Jesus Christ, you may want to revise your strategic model to exclude dumping people into rivers. That, uh, sounds like a risky professional gambit. A guy could get muddy that way.

He destroyed my life and my relationships and got a lot of people seriously hurt while sending death threats. I didn’t kill his man, but I should have and if anyone ever tries to earn like that again off me in any field, I would. FORTUNATELY, we have computer programs now that let you lynch people online while targeting their friends, families and employers, so thats unnecessary. But no man should get violent about another man’s money. He processes your paper work, declares you a fraud and then has the community attack you, OR you just lose a ten year investment worth tens of thousands. Or you pay him to stop. That was my life’s savings and education dude.

It sounds like you have legal recourse. If you didn’t sign up to pay him money, then you don’t owe him money.

That really sounds like extortion and everything after that sounds like defamation with tangible costs to your career.

That seems like you have a real case and if he’s done this to a lot of people there could be a class action lawsuit. If he’s done this in multiple states, shit, that’s interstate racketeering. That’s federal. If he’s done this enough times and enough people get together and file a lawsuit, then the costs per participant go way down.

Wouldn’t you rather see his professional name ruined and him being financially destroyed than risk taking matters into your own hands? I know it feels satisfying when a body is angry but afterwards you still feel like shit and everything he did to you and everyone else is uncorrected. Hell, someone else might just take up exactly where he left off.

Sounds like his racket is the thing that needs to be ended, not just him.

Yeah. I agree. But I don’t have any money for a lawyer and most don’t understand that thats NOT a martial arts tradition. They kinda think “Oh, this is just how they do things.”, not realizing its a form of abuse.

Never in my professional life have I had to PAY to work. Ever. Especially when they pay is only 24k. WTF? And when you leave a position, goons don’t chase you down to the next job site.

Dude, that really sounds like extortion. Serious. Not a legal expert, I don’t know the nature of his possible claim if he even has any but he’s probably done this to other people. If he doesn’t have a contractual agreement with you then I don’t understand how he could possibly be entitled to anything and even then, not all contracts are binding because they violate fundamental legal rights and protections.

For the record, Osiris was treated very poorly, and in an unacceptable manner regarding the details of his promotion.
He is a legitimate 2nd degree black belt in Brazilian Jiu-Jitsu.
He has earned his spurs on the mats.
Anyone that says differently is incorrect.
Anyone that made fun of him, because the people who should have been looking out for him, instead of trying to exploit him, failed in their ethical responsibilities, are pathetic.

He just did it again the other day. To Robert Degle. It’s all he does for a living. Literally, if you plan on getting a BJJ black belt, there’s multiple people collecting bribes. At least with Kukkiwon there’s a test. Here they just sorta do intercepts until you pay them. Because BJJ is a 10+ year course, even if you meet the requirements, they can still just change the rules and then fail as you’re completing the course. They come into your business, or someone around you goes to them and then strangers show up asking for money, and that gets nasty.

Like, if BJJ is a frat, its a frat. Just say so. These are people that have been told its a competitive sport and an academic course of study. And they paid top dollar for it, only to be met at the end of the course by this thug.

This is what he does for a living. In this case he broke up a team so that the students would have to hire his people for belts and reentry. This person is a literal fucking parasite.

BJJ Globetrotters banned from the IBJJF

Help me out. I know the IBJJF does some shady shit but I’m not understanding the big issue with the screenshot.

How much of a problem is this really? How many people register as a brown belt and then want to register as a black belt less than a year later? It’s weird for them to have that one year policy but it doesn’t seem like something that would be a problem for most people.

So you’re chilling and you don’t have to register a brown belt. You gotta register a black belt in many cases for various reasons. So you do. So now you’re no longer eligible for black belt.

I genuinely want to understand the situation.

It looks like Degle was registered as a brown but not until less than a year ago. So now he can’t update his registration and compete as a black belt for a few more months. But he’s a black belt. They didn’t stop him from being promoted.

It’s a lame rule, but I’m not seeing the huge deal here, especially since it will affect almost nobody who competes on a regular basis with the IBJJF and keeps their registration status current.

And we’re only talking a few bucks that he paid when he registered as a brown. If I remember correctly, when my son updated his registration from blue to purple it was like $40.