The Quiverfull: The Christian Patriarchy Movement and Related Cults

Yes, that was pointed out in one of the links I posted, and it’s an obvious analog.

It’s not an uncommon point of view across American Christianity…

I mean, especially in PNW, these people had a Jesus World Tour. Hard to argue with that.

And see that referency to decentralized control at state/local level.

REMIND ANYBODY OF SOMETHING GOING ON NOW?

According to many in Reformed Circles, the writings of Rousas J Rushdoony influenced homeschooling (promoted as early as the mid ‘60s by the Moores) through the vehicle of Christian Reconstruction, a potent influence within the “Christian Right.” Christian Reconstruction derives from Theonomy, seeking to establish God’s law as the basis of secular laws (and all law). The symbolic focus of the controversies surrounding the retaining of displays of the Ten Commandments in court houses provides one of the more simple and obvious examples of this movement.

Christian Reconstruction focuses upon early US history when laws were based solely on the Bible (e.g., South Carolina’s early state law that said “anything advocated as a liberty in the Bible is protected and anything illegal per the Bible is punishable), seeking a return to America’s original Christian law. Rushdoony stated that he did not advocate the strict intolerance of such as was seen in the early Massachusetts Bay Colony, rather redefining “theocracy” in terms of the law only. He believed that re-establishment of basic Biblical law in concert with the decentralized government through sovereignty of local, regional and state government (as consistent with the original system of the founding fathers) would create the ideal milieu of religious freedom, fostering reformation of the culture for Christ through evangelism.

It is commonly assumed to be a dictatorial rule by self-appointed men who claim to rule for God. In reality, theocracy in Biblical law is the closest thing to a radical libertarianism that can be had…

No institution, neither church nor state, can equate itself with God and claim control of the public (or private domain).

Under Biblical law, restrictions are few, liberties derive from God’s law (not the government and thus can only be restricted by the government), primitively summarized by the concept of the golden rule. It assumes a basic “do no harm” concept where the law serves to protect individual rights, not grant them. This view of law as a protector of liberty parallels today’s libertarian political philosophy (Lex Rex, “the law is king”), though today, it denies that God is the source of law. However, Christian Reconstruction creates some natural tension with those individuals or groups who do not embrace a Calvinistic and postmillennial eschatological view, and some also criticize the principles of Theonomy as supportive of legalism similar to the Judaizers because it does emphasize the value of Old Testament Law.

I knew some folks back in Texas like that.

They spent hours and hours trying to figure out exactly what the bible meant in the modern context.

The mental gymnastics involved were considerable.

Roots of Botkin’s brand of bullshit.

In terms of family order, the resurrected writings of the two prominent Confederate Presbyterian ministers Dabney and Palmer, in addition to the desirable advocacy of homeschooling and decentralization of the federal government, also strongly emphasized an authoritarian-style patriarchal home (father as prophet, priest and king for his home as the “natural religion of family”); an opposition to women’s suffrage (decay of order that would promote the dissolution of the slavery system); and restricted activity for women based on a degree of ontological subordination (women seen as of lesser essence than men); and a divinely ordained, entitlement-oriented, hierarchical structure for society which included slavery. The writings of Benjamin Morgan Palmer in particular also include elements that suggest that men mediate salvation for their families within their function as family priest under a particular, authoritarian application of the Calvinist Doctrine of Federal Headship.

The irony is fabulous. “Cryptic” heh. Where we’re going Beaker, we won’t need roads. Or science. Or reason. Only Discordia.

I’m guessing you never read The Dark Tower?, and didn’t get my Stephen King reference to your topic? Guns and roses?

It’s OK, happens all the time. I’m the Dennis Miller of Bullshido, apparently, only making myself laugh sometimes. 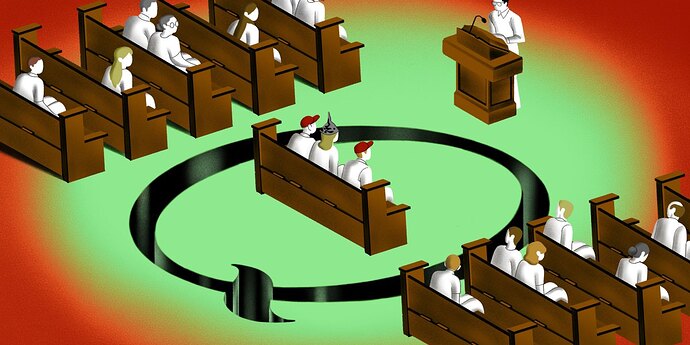 Evangelicals are looking for answers online. They’re finding QAnon instead.

The first family to quit Pastor Clark Frailey’s church during the pandemic did it by text message. It felt to Frailey like a heartbreaking and incomplete way to end a years-long relationship. When a second young couple said they were doubting his...

I’m guessing you never read The Dark Tower? , and didn’t get my Stephen King reference to your topic? Guns and roses?

I don’t read any of King’s works, so no.

I don’t read any of King’s works, so no.

Too bad, he’s written so much about religious zealotry but zealotry in general, especially in times of chaos. The Running Man is another great example of a fascist future where instead of Christianity taking over, it’s the reality entertainment industry. Then in The Stand, which has so many hidden meanings, civilization itself is to blame, even though God is real and wills the communion of free people. Seems relevant to today’s events, doesn’t it?

The reason for the cryptofascist symbolism in common with the Quiverfull movement and the DOD is that this is Evangelism 2.0, where they use social media to attract militant, abled-bodied, God-fearing men to their cause in the same way the Crusades perverted Christianity into a militant cult.

The entire Warhammer 40k ethos covers this concept, which granted is a LOT of material to sift though. I guess my point is that I’ve read thousands of and thousand of pages, fictional and non, about this very subject so I’m glad you picked up the gauntlet, so to speak.

I have tried to read Kings stuff. My Mom was/is a big fan.

I just could not get into it. Just like I never could get into LOR. Might as well hit me over the head with a sleeping tablet. And that’s back before I wore glasses and had too many concussions.

The reason for the cryptofascist symbolism in common with the Quiverfull movement and the DOD is that this is Evangelism 2.0, where they use social media to attract militant, abled-bodied, God-fearing men to their cause in the same way the Crusades perverted Christianity into a militant cult.

Right, I think I posted about that above. It became obvious when I read some of Botkin’s drivel. Well, a lot of it. Man…

In the past, he and his “group” had tried to get people elected in Maryland, I believe.

The amount of material is unbelievable.

And he’s just one of them…

The whole issue is multifaceted, and I would not say totally coordinated in any obvious way. But shit IS connected, certainly in spirit if not exact purpose/vision.

Thanks for the link, good reading.

Now I see what you were getting at. That’s a great link, and ties well with what I’ve been posting, thanks again.

What happened to Ghost?

He abandoned ship due to drama on the old forums with Gonzo, and others. He hangs out elsewhere now.

I’m in contact with him. He’s still alive and doing pretty well.

Oh, I remembered the drama. I just figured that he was active enough in stirring it that he wouldn’t jump ship over it.

There was butthurt involving another member who he is good friends with and was white-knighting.

Gonzo is Satan Incarnate, so…

Oh dear dog it goes all the way back to that? Ok… well I hope he is well.

Ev is fine to, she escaped Kalifornia. 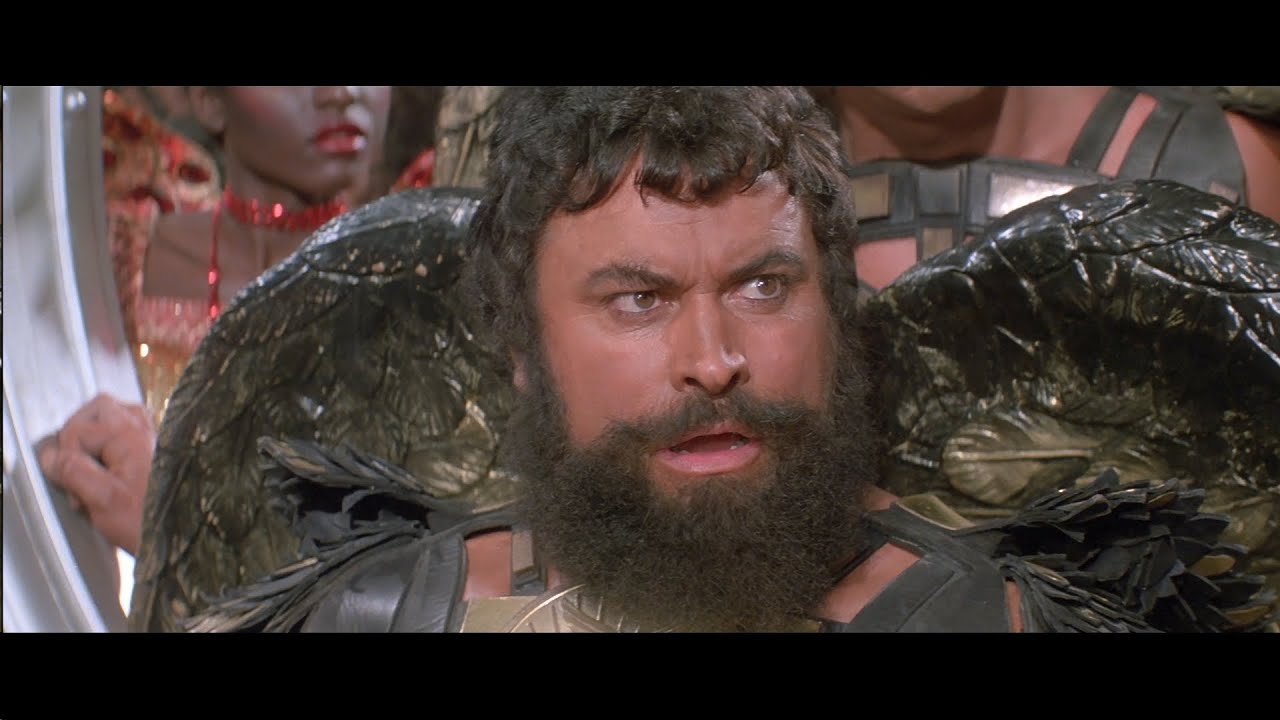 Opinion | The Evangelicals Who Are Taking On QAnon

Some leaders are trying to save their flocks from the lure of the online conspiracy theory. 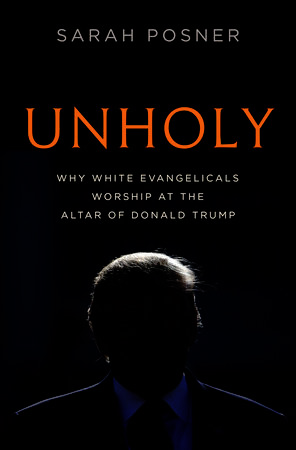 The awful thing about the prosperity doctrine is that it is a lie that was foisted on them by money grubbing clergy.

If there were a God, evidence seems to indicate that any money they give to rich charlatans with private jets will ever put them further and further behind in the rat race.