Apart from the slam poetry

Only two doofa droppings, this morning. A marginal improvement in doofa behavior.

You are responsible for your own frustration, not anyone else.

That word loses meaning, when used in exaggerated fashion.

Apart from the slam poetry

Nope, not at all.

Speaking of off topic.

Somehow, I mostly disagree with that.

I never once claimed the Greens were corrupt lmao a political party doing things that are counter productive or destructive does not require them to be corrupt. The Greens likely truly believe they are/were doing the right thing.

I never once claimed the Greens were corrupt

Exactly what Green Party policies are you referring to, and how have they impacted on the current situation?

Exactly what Green Party policies are you referring to, and how have they impacted on the current situation?

The nuclear phase out. “Green” or “sustainable” non fossil fuel and non nuclear energy generation is basically a scam for anything larger than a commune. Which is why they are still buying Russian LNG and looking for ways to avoid or ease sanctions on Russia.

The Greens have been part of the federal government during two periods: first as a junior partner to the Social Democrats (SPD) from 1998 to 2005, and again with the SPD and the FDP following the 2021 German federal election.

Whilst the nuclear phase out was a Green policy it is an overwhelming popular policy goal amongst the majority German voters, and comitment to the policy remained in the 16 years the Greens were out of federal decision/policy making, for this reason

Is this “freind/enemy distinction” thing you go on about affecting your objectivity, I wonder?

And since nuclear in Germany only produced approx 15% of the country’s energy needs, Germany would essentially be in the same bind if the nuclear sector was running at full pre phase out levels

What have I written that was objectively incorrect?

I believe I’ve written it in an argument here before but frankly the majority, who are not politically engaged, don’t form policy opinions and then impose them on the government through the vote they have most of their policy opinions imposed on them by power. That is, if you manage to gain power to impose your policy preferences the majority of the governed, that is the majority of people who are politically unengaged (and should be politically unengaged, this idea that a political system should require all citizens at all times to be engaged politically to the point they become mentally ill is absurd), will simply adopt that policy preference.

The most recent and clear example in the US was gay marriage. Until Obergefell in 2015 the majority in the US were not pro gay marriage. Even Barack Obama was not pro gay marriage when asked. California, the most culturally liberal state in the entire country and a power center for Democratic and liberal politics, voted overwhelmingly against legalizing gay marriage via referendum (and this breaks along interesting racial lines). But the elite consensus was pro gay marriage and it continued to get pushed despite Democracy rejecting it.

And just like when I described our de jure and de facto political system to gregaquaman in the other thread, mainstream “conservatives” are now trailing along at the edge of acceptable liberal opinion and are also pro gay marriage.

Now take that elite consensus and combine it with anti-nuclear fear mongering propaganda from elites and you have a powerful opinion shaping force.

Why do think it’s so novel to state the most obvious things in the stupidest ways?

Yes governments make laws and the individuals in government have the power granted to that government to do some governing… Holy shit on stick batman.

And if the people that form government make bad laws you can elect new people in a democratic system to make better laws and wield power differently.

You are just using obfuscation to try frame that into a negative.

How do you know the “vast majority” of people didn’t support gay marriage? Did you ask them all?

And what the fuck would it matter anyway.

That’s the beauty of constitutional protections. Populist fucks like you can’t just shit down the throats of their scapegoats to gain political points from a fickle mob that often changes it opinions based on how the wind is blowing.

Populations opinions, knowledge and morals change over time. That’s makes the ability to change leadership even more important. Because today’s problems might not be tomorrows or even recognized as problems in the future at all.

Laws are always imposed by the government. That’s in their fucking functions. It’s built in. It’s a feature not a bug. At least in a democracy the populous can switch out the governors when they are doing a shitty job.

An autocrat also has the power of their government behind them. Except their is no recourse of the people being governed to change course by changing leadership. They are at the whim of the autocracy. That one sided imposition is where people are actually forced to the line. Through extreme violence mostly.

You must be dumbest fucking political scientist in country.

How do you know the “vast majority” of people didn’t support gay marriage? Did you ask them all?

And what the fuck would it matter anyway.

LMAO “Democracy is the will of the people! Except when I don’t like it then what the fuck does it matter anyway?”

Laws are always imposed by the government.

You must be dumbest fucking political scientist in country.

You can’t even discern the fundamental argument. You have no business calling anyone else dumb.

The question is how much do you enjoy poles?

Such a coy boy.
You flirt

And I haven’t brought that up. Or discussed nuclear anything.

Not aprori declarations that it is truthful.

So back this claim up then. If that is what your are saying. 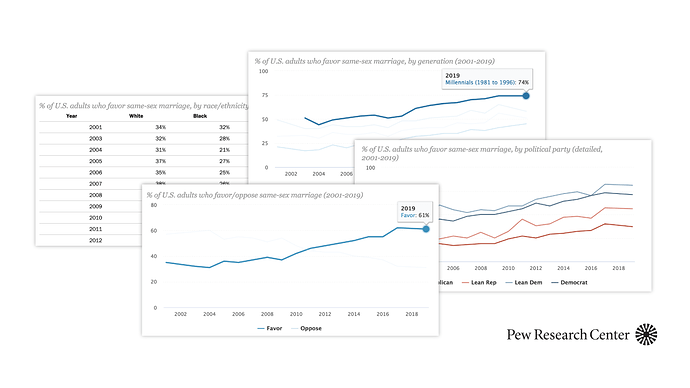 All I can do is provide data that correlates with certain events, like the turn of Obama from anti to pro gay marriage, Obergefell etc. There is more than enough evidence to make a case that public opinion is elite driven.

And I haven’t brought that up.

Yeah that’s my bad I wasn’t paying attention to the username because there really isn’t much difference in the way you or doofaloofa argue.

So you have the president. A person in power changing their position and public sentiment changing concurrently in the example you gave…

That is not evidence.

Bro I presented points of evidence which taken together point to my argument being the correct one. You have not presented a counter except “No that’s not true just trust me!” And frankly, even the people who hate me politically agree with me. Progressives think public opinion is elite driven as well and they act as if it is true politically.

It’s only “ranting like a preacher” when you disagree with it. If you agreed with me you wouldn’t be attempting to attack my entirely normal tone.

Obama, and Bush Jr should both be tried, for countless felonies related to domestic spying with indiscriminate warrants, or no warrants, in violation of the 4th Amendment, among other things.

Arch Criminals, by volume, multiplied by the severity of those crimes and misuse of Office, if nothing else.

It’s really not worth it for me to explain to you what a null hypothesis, p value, and the weakness of your “evidence” is and how to take your anecdotes and apply it properly in how the scientific method should be applied to your conjectures.

I am not a scientist for one thing. And also think you are a bullshitter. So why would I bother. If you actually cared about the truth you could do it yourself.

You keep saying your a political scientist so you should have a strong grasp of burdens of proof and the scientific method already.
You should understand how weak and disconnected your evidence is from reality. And how far removed you are from even licking the truths nutsac.

You have anecdotal evidence at best. Not even good enough to form a decent hypothesis.

But you probably don’t care because you are just bullshitting everything and are a liar.

Surely, polls can be useful, and the reverse, and they are unreliable.

As is all research, that relies on self-reported measures.