Should have used this argument. It’s honestly not even fun to clap back on them anymore. I’m just ready for everyone to move past this pretense and start being truthful about their political opinions instead of trying to pilpul rules lawyer their way to the outcome they want. Just say you want your political enemies disarmed because you believe the state is on your side.

Should laws and constitutions change and evolve with time?

Although I think our last constitutional referendum was the Republic debate.

Here in Ireland, we have changed the constitution twice in recent history, by referenda, to allow same sex marriage and abortion, and previously allow divorce

Any sensible constitution should allow a mechanism to adapt IMO

Yes. That’s why we have the amendment process.

Pretending someone meant something other than what they said is not a part of that process.

Yeah. That seems to be a common mis belief though. from every side of the argument. It becomes a theological debate basically.

The courts are really the only people who are empowered to interpret what the constitution actually means. And therefore to a certain extent pretending the constitution means something other than it means can be exactly part of the process provided the right people are convinced.

Especially if you have witnessed what the courts actually do to the written law.

Especially if you have witnessed what the courts actually do to the written law.

One must pay attention, to whether one’s courts are on a French-type system, an English type system, a Turkish type system, or some other system.
And as a meta theme, whether judges make law, or interpret laws, regarding the courts.

Why can’t you just literally look at the system in place?

And then see if it does the thing?

The different systems e.g. Civil v. Common Law, approach the law and the place of the judiciary in government differently.
Regardless, Twitter blue checks and Journoids are not legal experts, barristers, attorneys, judges etc. They are no more SMEs than any other layman who can be bothered to do some reading into the basic concepts of The Law. They aren’t giving their objective, unbiased legal expert opinions on topics like the 2A. They are starting from their conclusion: they are in power, dissidents/political enemies must be disarmed. We aren’t quite at that stage yet where they will openly admit this; they must still couch their positions in terms of saving lives, “gun safety”, common sense “gun reform” etc.
But at the rate we are heading, the rhetoric is likely to escalate soon to the point that we may not be in open warfare or anarcho-tyranny (though this is arguable) yet, but they will be openly calling for those things.

Yeah. But it is atill a completely different beast to say Phrost making the argument vs random twitter guy.

Because regardless whether Phrost makes the most compelling well researched and convincing argument regarding the interpretation of the constitution. A high judge somewhere can go “nah fuck of”

Which is what judges tend to do.

It is basically a rebranding of a self defense law argument i make when someone reads a law on a book and is like obviously i can do this thing. 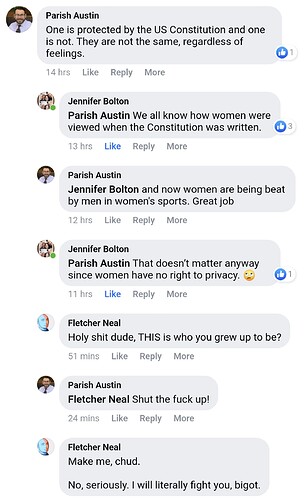 I think there was a misunderstanding of what I wrote. I’m arguing that the authority and interpretation do not matter; the layman blue check or journoid talking about “Constitutional law” on Twitter are starting with their desired goal and making whatever argument possible to fit it regardless of statute or case law. And it doesn’t matter if you point out the logical inconsistencies or factual incorrectness of their position. If you are their enemy they will argue to curtail your rights; if you are their friend they will argue to protect your rights. This will happen even when the two positions are inherently in conflict.
As Carl Schmidt said: the only thing in politics that matters is the friend enemy distinction.

I support mediocre male athletes transitioning and then dominating women’s sports, in the case of combat sports literally beating their skulls in. Statistically, women voted for it. They’re just getting what they wanted. It’s Democracy at work.

There are no logical inconsistencies. There is what SCOTUS will accept and what they won’t.

If you have ever talked to an aikido guy about their style. They can rattle off hours of logical argument why their shit works.

But it doesn’t. Because you don’t see it work.

Same thing. Same sort of debate. You don’t counter point every claim they make when you have a hard and fast answer.

If you are suggesting that people use this weird rabbit hole logic method to support a biased view.

Well yeah. That is obviously what it is designed for.

And Ithink your friend/ enemy distinction is wrong. For example the NRA want you to have rights. But they are not your friend. They benefit from those rights.

I think we are arguing past each other. I’m not talking about a case granted cert by SCOTUS and the two parties making oral arguments. I’m talking about “politically active” individuals who make political arguments against their political enemies in the so called public square per the OP. Those same people who vote, organize, canvas, volunteer, protest etc. and in the case of journoids engage in the agenda setting function of the fourth and to a lesser extent the fifth estate.

Your analogy would be more relevant if you were both born into a dojo and the dojo happened to be on the side of the Aikido guy, or at least he felt like it was on his side, so the Aikido guy starts arguing that you shouldn’t be allowed to throw anything but a slow reverse punch because when your dojo was founded the predominant striking technology was the reverse punch.

“And Ithink your friend/ enemy distinction is wrong. For example the NRA want you to have rights. But they are not your friend. They benefit from those rights.”
This is how functionally politics operates. Which is why you see “mostly peaceful protests” being reported by an anchor standing in front of a burning city while the Jan 6 self guided Boomer tour in the Capitol is treated like we were 30 seconds from an implementation of the Fourth Reich.
This is why when leftist actors are arrested for engaging in direct action at protests and riots bail reform organizations that are from their faction will show up with bail money (or in the case that their candidate for mayor shoots an opposing candidate for mayor), or in some cases even individual political elites show up with bail money.
This is why, after a lot of fiery rhetoric about how conservative SCOTUS Justices will pay or feel the wrath of the people etc. from political elites like Schumer, when someone finally does go to the home of a Justice to assassinate them it becomes a non story after a single day.

It’s the Friend Enemy Distinction, and of any framework of politics it has the most explanatory power.

Do you think you are doing the thing you are worried about other people are doing?

I’m not worried about them doing it. That implies that I think it is wrong. Friend Enemy Distinction is a framework for analyzing politics which I have found to be the most succinct way of looking at politics throughout my entire political science education even at the graduate level as well as my time as a practitioner. And yes, I am doing it because if you don’t understand the Friend Enemy Distinction you are NGMI when it comes to politics.

In the specific subject of the OP: the 2A and disarmament, yes I am “doing it” because I recognize that I am not on the side of the state when it comes to my politics and I’m not on the side of people calling to disarm their political enemies. So I want to stay armed and I will make whatever argument is effective for that regardless of precedent.