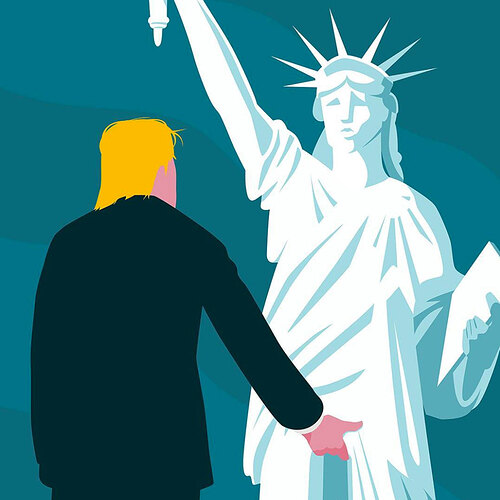 Nominate who you think will receive a pardon

My selection is Capitol Hill Rioters

I think if he pardons those guys, the senate will convict him. He needs to dick-tuck on that one.

He’s quick to do that.

If he doesn’t pardon them there’s going to be an army of pissed off, easily manipulated white men with guns looking for pay back

As to the GOP suddenly growing a spine we shall see

I expect 45 secretly wants to be barred from running again

He can’t call himself a shaman until he drinks reindeer urine.

If he doesn’t pardon them there’s going to be an army of pissed off, easily manipulated white men with guns looking for pay back

No, man. They still don’t realize they were used. I bet most of them are sitting at home right now blaming everybody else around them for getting out of control by doing the exact same shit they were doing.

They still don’t understand. None of them have shown the slightest air of realization.

Shamen is asking for a pardon via his lawyer

If they go to jail their lives will be ruined

He seems pretty harmless, though he did leave a “threatening” letter for Pelosi, but I’ve not read it

They still don’t understand. None of them have shown the slightest air of realization.

It hadn’t occurred to me until now but I bet there was a mad dash of Trumpst operative defense attorneys trying to drown any narrative other than the present Trump brand trying to wall off their contact with with news media and any lawyer that might name Trump as a co-conspirator.

So guess he drank the piss

His lawyer also said he has a long history of mental illness. Depending on the daignosis, it’s likely he’ll never really sober up to what he did for the rest of his days.

Rudy will save the day!

Getting raped in prison seems a little unjust in his case

Is that what the kids are calling the psychedelic scene these days?

Shit, just eat a bunch of datura and you’ll be the coolest kid in school.

This thread does not endorse this message

We advise anyone curious about the effects of datura to go to the datura trip reports vault on Erowid.

Getting raped in prison seems a little unjust in his case

I’m not going to make many friends when I say this but insurrectionists, agent revolutionaries and domestic terrorists must be ground into a powder so fine that they can never effectively become tangible again.

I would refer you to the life and struggles of Josip Broz Tito.

He found that the only reliable way to keep out the KGB was to make them terrified of ever crossing him. He suffered greatly at the hands of the KGB before he finally consolidated power. The KGB took his wife from him, so he rained down terror on them.

The only thing that stands between any nation and the dustbin of history is a strong national defense and a deadly counterinsurgency.

It helped alot that Josip was a true believer in his cause and a man of compassion for his people.

The Soviet strategy of fomenting revolution to prop up puppet leaders (like Trump) isn’t hard to see coming. It’s their one and only trick. (BTW The wild stupidity of institutional Republicans that propped up Trump and sheer ignorance of any individual that voted for Trump after seeing his connection to Russia is something they are going to have to live with for the rest of their lives. Or more likely, live in denial and intentional ignorance of for the rest of their lives. I digress)

The most effective trick to counter intelligence is higly organized and intelligently executed decimation of enemy assets. Don’t do it stupidly. Don’t just start wacking people blindly but if you find a cell of terrorists, the best way to stop their agenda is to make sure none of them ever go free again for the rest of their days.

That includes the mentally ill.

We lock up the mentally ill all the time for serious crimes because just like sane people, once a person crosses a certain line there isn’t any bringing them back into the fold safely.

I don’t agree with the hamfisted ignorance and contempt for nonviolent true activists held by J.E. Hoover but the results of his methods were undeniable when applied in the right direction.