Does anyone have any questions on the war on Marxism in America, and the stress it puts on our society?

I have a question

Why not just allow Marxism to do it’s thing, in a spirit of freedom of thought, and don’t go to war with it ?

Because their explicit plan is to crash the right, left and state into each other and they’re doing just that.

And, with a thorough explanation, what would be wrong with the right, the left and the state meeting?

For all we know, a collision like that could end up productively improving things for people down the line if people learned to see where each other was coming from. And yes, I am being optimistic just to see what the arguement for why it is bad that you would bring to the table

LOL @ the middle aged man, end of the world, now I get to shoot my gun, fantasy

I prefer Zombie Apocalypse myself

Have you been to America in the last several years? “Nothing ever happens” is how multiple militias were roaming the streets of DC and then everyone got shocked when they breached the Capitol. It took them like a month to get to that point.

The phrase you’re looking for is “I don’t get involved in stuff like that.” You leave off “and you don’t either.” because we’re literally different people who do different things.

And people need to realize that it’s much more exhilarating to do stuff than to make it up. So yeah, that’s really whats going down, and last time things flared up it left like a dozen dead and shut down the US capitol. You may remember that from the news.

Days of Rage: America's Radical Underground, the FBI, and the Forgotten Age of...

This topic will get you started.

LOL @ the middle aged man, end of the world, now I get to shoot my gun, fantasy

And I will let people who I know would want me in jail just for what I think tell you about the kind of people who are willing to engage in political violence. 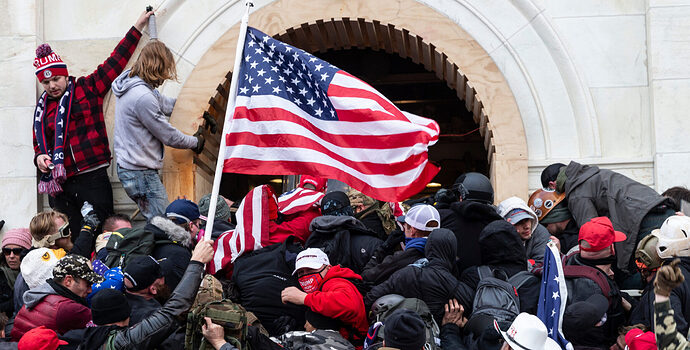 In a deeply polarized United States, ordinary people now consume and espouse once-radical ideas and are primed to commit violence.

Although incidents from the left are on the rise, political violence still comes overwhelmingly from the right, whether one looks at the Global Terrorism Database, FBI statistics, or other government or independent counts. Yet people committing far-right violence—particularly planned violence rather than spontaneous hate crimes—are older and more established than typical terrorists and violent criminals. They often hold jobs, are married, and have children. Those who attend church or belong to community groups are more likely to hold violent, conspiratorial beliefs.

The phrase you’re looking for is “I don’t get involved in stuff like that.”

True, but if everybody had the same attitude there would be any “stuff” to get “involved” in

in jail just for what I think

People who write for journals like Journal of Democracy would support putting me in jail for wanting to abolish democracy.

Yeah, if someone like you got too powerful, we’d run all the missions.

Because it’s killed more people than both world wars combined. It’s a fucking shit-show of an ideology made up by a man who had no concept of how humans think or behave.

It’s basically the Chun of political and social ideologies. Looks attractive on paper but is disastrous when applied in reality and its practitioners get seriously hurt. Then, when it utterly fails it’s proponents claim that it’s not teh Re4L Marksizm/ComMunizm etc.

What they’re doing locally is hunting down Patriots, Nazis, rambunctious gays and other minorities, and transexuals in their homes and jobs and threatening them with violence and social isolation to force them to comply with their Marxist agenda. By directing violence in this manner they get all three sides fighting against each other which further harms the country. So you get stupid shit like Antifa, Patriots and the feds all getting into it at FBI HQ. You also get serious shit like Jan 6th. They hate what we stand for. By we I mean all of us.

This is largely false.

Yes, the underlying premise, that “the right” commits more violence than “the left” is untrue. Who is willing to commit violence on “the right” is true.

That is, the people on “the right” who are willing to commit political violence are largely normal people (as Curtis Yarvin would say “Hobbits”) and the people on “the left” willing to commit violence are largely literal street gangs or degenerate educated white collar middle class urboid children who are deathly afraid of becoming Walmart employees.

Your profile is all wrong though. THESE GUYS DON’T HAVE JOBS. They get menaced at work for their beliefs so if they’re lucky they do just enough to make a living in something anyone can do. That’s WHY they’re violent. They also got shut down during the pandemic which created a lot of new fighters on both sides.

The rest are military and so violence IS their job.

They get menaced at work for their beliefs so if they’re lucky they do just enough to make a living in something anyone can do.

In my neck of the woods “hobbits” don’t have jobs where they would get menaced for their politics. Email jobs/white collar jobs absolutely. I’ve done both and in the latter environment you have to be careful about your politics. In the former much less so. I was working in a skilled labor job during COVID and when Jan 6 happened. Boomers will fed post IRL at fucking work if they are blue collar lmao

Also, totally lied. Not doing a new show. Biden has gone insane and is about to make the dumbest political move in history. I’m gonna duck and pray I don’t get disappeared.

People who write for journals like Journal of Democracy

Perhaps i could interest you in my new concept?