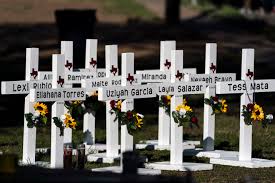 Mass shooters overwhelmingly fit a certain profile, say Jillian Peterson and James Densley, which means it’s possible to ID and treat them before they commit violence.

So is this a minority report deal. Or can we change socio economic factors to prevent triggers?

The other issue being, Psychologists and their approach at therapy are neither better than placebo, nor better than random chance.
So, in no circumstance should the monies those two researchers rather self-servingly mentioned be allocated towards paying more Psychologists $70,000 a year salaries.
Rather those monies, and other monies should be allocated for more positive socialization extracurricular activities, from niche sports to art, music, outdoor clubs, chess club, even game clubs.
Positive environments should be stressed, and coaches / facilitators with both expertise in the activity, and who can be positive mentors should be recruited.
High crime areas that take provide after school youth mentoring programs with positive social support structure of their peers, and positive adult mentors, have repeatedly been shown to reduce youth arrests by around a third, and reduce youth on youth violence by about half.

Whilst the potential remedies are open to debate, surely we can all agree that the kind of research these guys are doing is a positive step in the right direction

Crime, and crime patterns, should be studied.
Realizing of course, that they may be useful in the aggregate, but are more not often than not, not reliably predictive regarding individuals.
ie, to @gregaquaman 's Minority Report comment, which is a good point.

They’re so right. A lot of that shit is avoidable though. Its so easy not to bully people. All you have to do is ask, when you get the call to join the pack of hate, is to ask if that is really your enemy. If hou say “No” and still persist, you deserve everything you get, as well as your partners in said endeavor and to a lesser extent those that sat by and watched. When you become a bane of someone who shows you no ill will, and may in fact be openly asking for peace, your life doesn’t matter. Like, if you were the primary aggressor at the bar, youd expect to die. But by blending in with a thousand others, the bully figures the odds are in his favor.

Anyways, as an actual expert in this field, I’ve encountered many aspiring shooters. They have different motivations. So sit back and enjoy tales of massacres that never happened. The first shooter I encountered, lets call him Green Monster, was a doozy. Of the shooters, he was the most disturbed and was the single most mentally ill person I’ve ever met.

His motive was simple. There were two elements. One was revenge against psychiatry for their genocidal campaign against those they deemed genetically inferior. While revenge was and is justified, his tactic of running through the hospitals with AR15s was a tad extreme. Somehow, he was located and after a pursuit lasting a few days, his door was kicked.

This is when something odd was noticed. He wasnt just himself. He kept manifesting as OTHER shooters and incorporating their personality into his own. He has been neutralized.

The next shooters I encountered were in one big group. Much like myself they wanted to retaliate against REDACTED for rejecting them unfairly. Imagine Buffalo on steroids and you’ll get an idea of the plan. Needless to say, bad things happened to them instead. REDACTED then accepted me as a member. While every would be shooter had different motivations, rejection from REDACTED was actually the primary issue. That battle rages today. Because its a spy war, the battle lines are confused with both sides not knowing who set them up or why. So REDACTED was wrong about who did it, while so were the shooters. A terrorist they hadnt considered was manipulating both sides and basically practicing his trade on civilians.

Oh, I almost forgot about The Joker. Silly terrorist POS with a cache of guns and explosives. Likes to set things on fire. We dealt with him by waiting for a minor incident, and then just running through their shit like Batman. After the Batman routine, we just started appearing everywhere. Then they stopped wanting to shoot everyone, considered killing themselves and finally surrendered. They got aggressive again later, but have their plate filled with some seriously aggressive men who ALSO may be a problem. So no one got shot and all is well.

But yeah, you should detect these people early and beat the breaks off them.