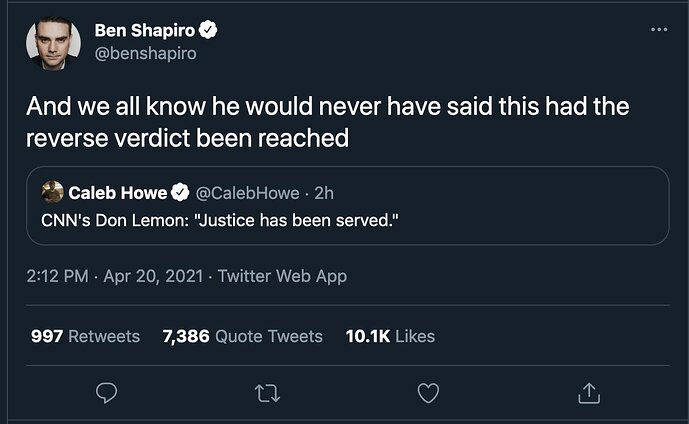 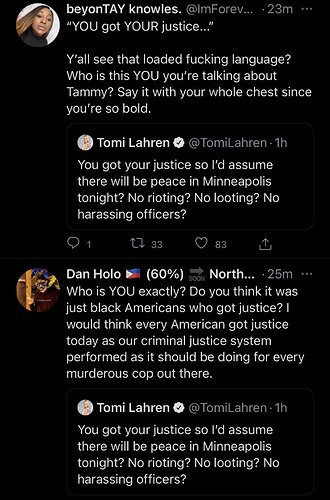 Nothing says “justice,” like a victory lap around the town square while simultaneously fire-bombing it.

“It’s not enough,” Biden said of the verdict. “We can’t stop here.”

The verdict is not enough! We need more. For the thing, you know. C’mon, man!

Not so subtle race baiting gets response it intended to get and the world keeps spinning. Well, It’s been 4:20 all day today… I’m just gonna ignore the news for awhile longer and make myself a sober-up beverage. Like a Bloody Mary.

The appeal should be a more low key affair.

Now that it’s the next day, can you tell us all about these alleged riots you were watching last night?

No, I didn’t watch them. I went outside, started a fire of my own, but it was for warmth and family time.

Who was it in our orbit that made the “Chauvinist” joke? They deserve some credit.

Its a little hard for a limey with no legal qualifications to fully understand the verdict “2nd Degree murder, 3rd Degree murder, Manslaughter”
I do not know what each means in the US so for me the sentence is key to my understanding.
Personally from what I saw intent to kill would be difficult to prove BUT im not sure that should matter much in this case as the guy had a duty of care and willfully abandoned that in a most sustained violent way so deserves to go to jail for a long time in my opinion.
I am also not sure how much race played into it (perhaps because I didn’t watch much of the trial) but given that he worked with the guy and new about some pretty bad stuff the guy had done in the past id be comfortable if somebody simply said he hated him for personal reasons and that directly affected the way he treated him whilst in his custody.
An officer of the law MUST be above that and thus this makes it much worse .

If he gets 25yrs id sleep well enough anything less id think was lenient anything more im not sure how id feel but lets say 25yrs give or take 5ish .

So you’re contending that there were riots last night, but you just didn’t watch them?

Almost certainly there were; I tried looking for them, I even searched for “mostly peaceful protests.” Our big tech overlords squelching, once again. 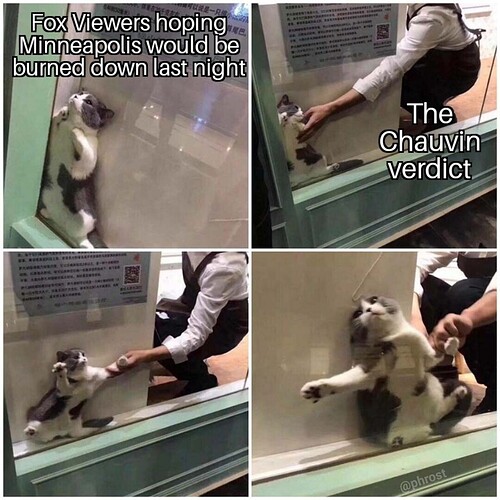 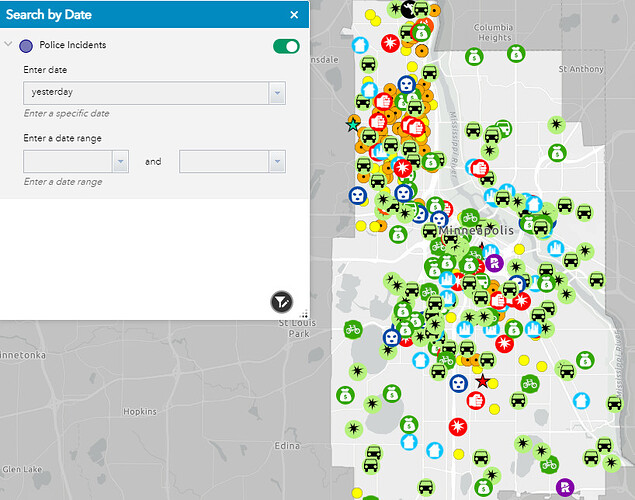 I would contend that most of the people that watch Fox News are lefties looking for a new reason to be indignant.