(Alleged) sex trafficker and posterboy for performative toxic masculinity Andrew Tate has been in the spotlight lately, propelled there by an army of angry 14 year old boys without actual fathers. And like any other person operating at the level of a 14 year old boy, he got his life all but ended by a much smarter 19 year old girl he tried to tangle with.

Here’s the fallout, in meme form, starting with the initial exchange. 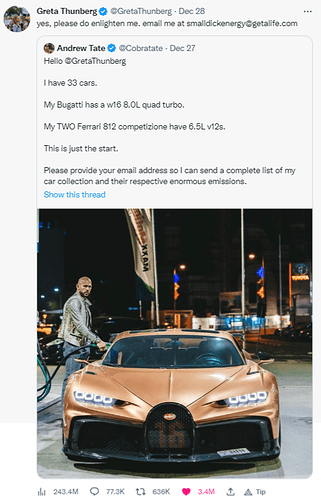 After being burned, he posted a long video of himself in a bathrobe, smoking a cigar and eating pizza, talking shit again to said teenage girl. I have no idea what he actually said because who gives a shit about the thoughts of someone who can barely read, but that’s not the point. 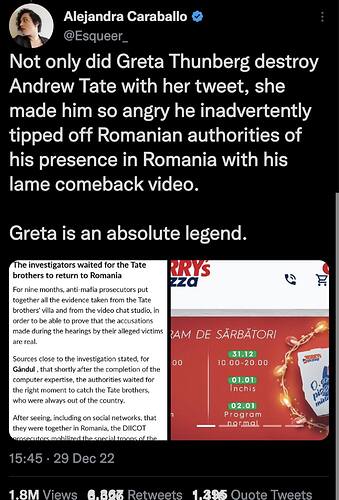 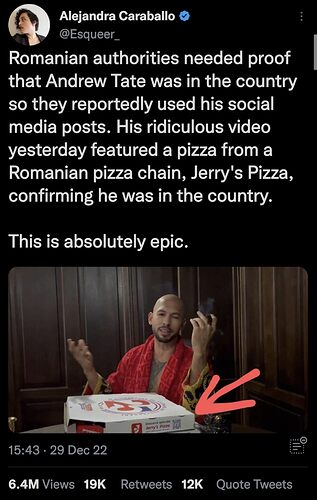 And of course, insult added to injury: 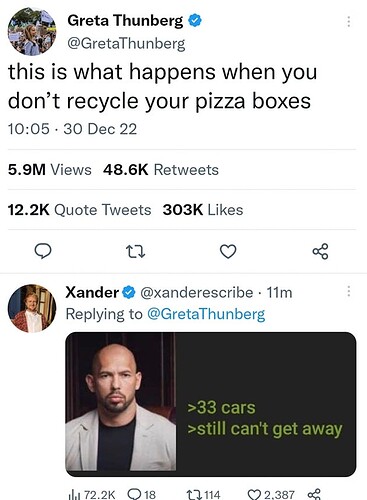 Maybe don’t fuck with an autistic teenage girl when that’s a goddamn superpower on the internet.

Consequently, the memes must flow: 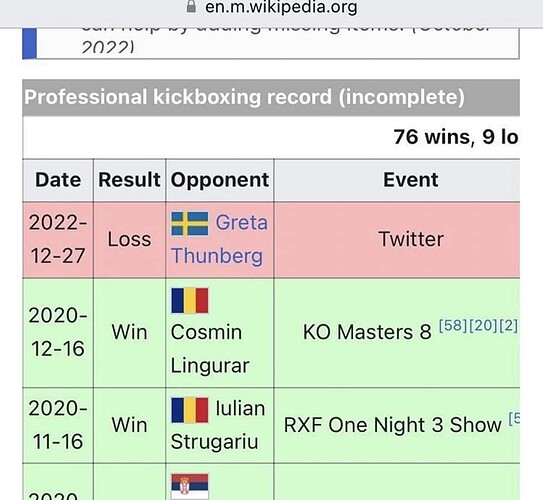 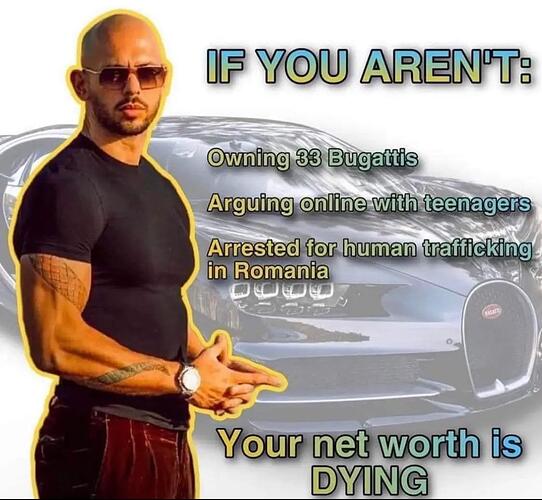 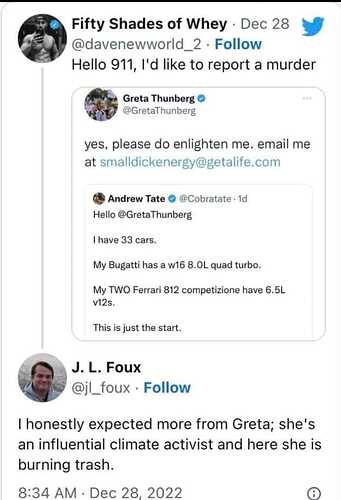 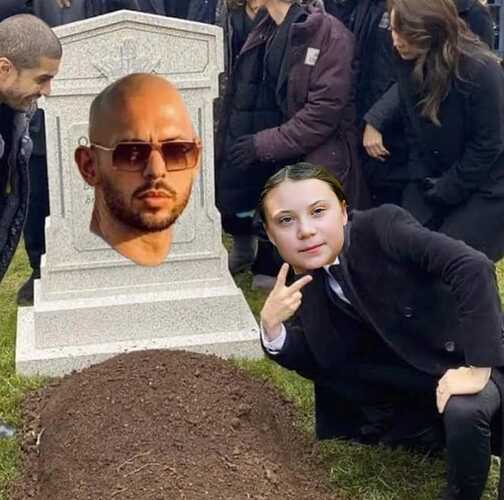 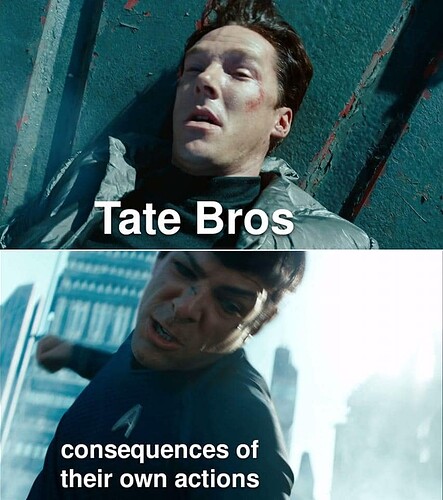 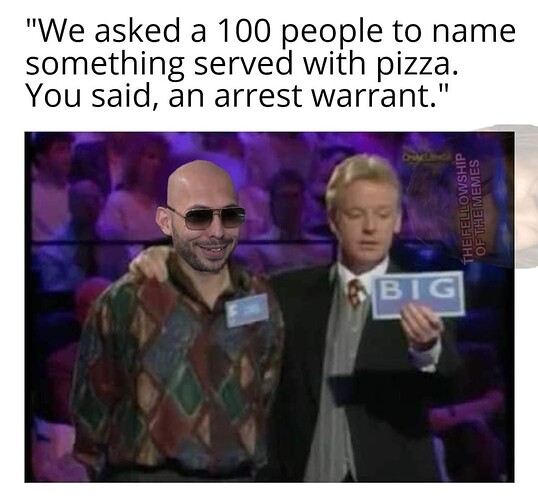 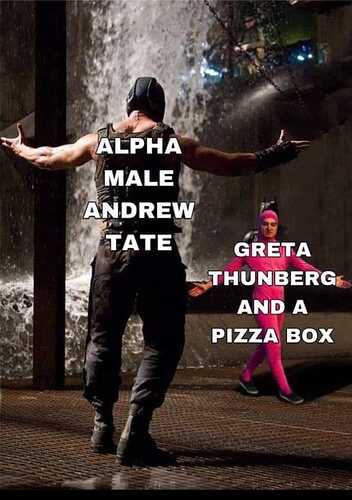 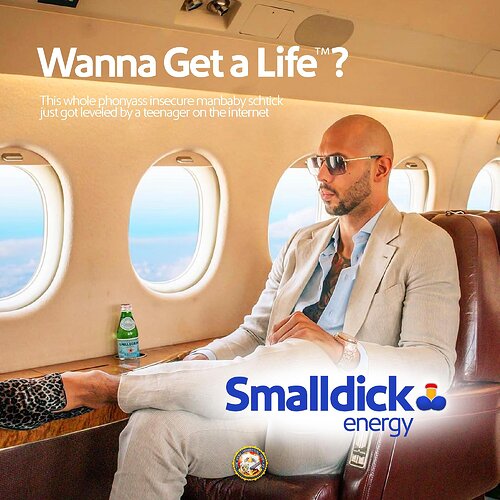 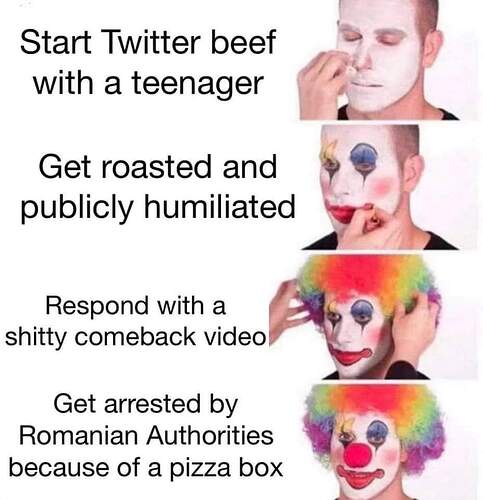 This whole thing is cringe tbqh. Tate is cringe but so is the Fetal Alcohol Syndrome case who wants you to eat the bugs.

We should be looking for alternative sources of protein. The cattle industry is ridiculously bad for the environment, and only a similarly tiny-dicked dude insecure in his own manhood prioritizes their need to perform masculinity by eating steak over what kind of world his children and grandchildren are going to live in. 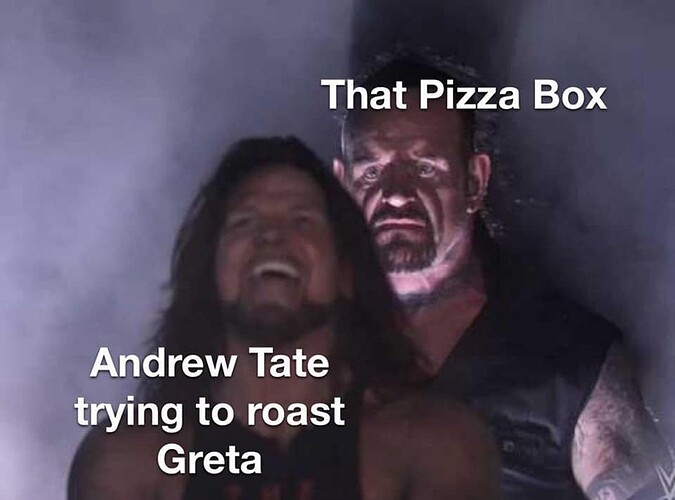 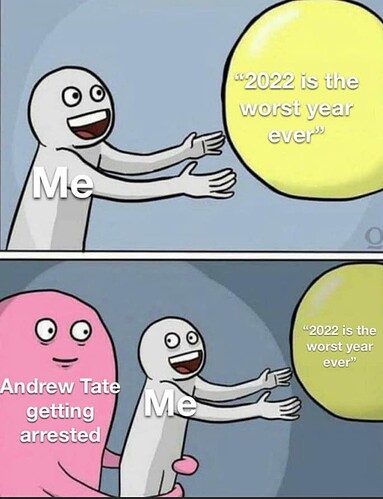 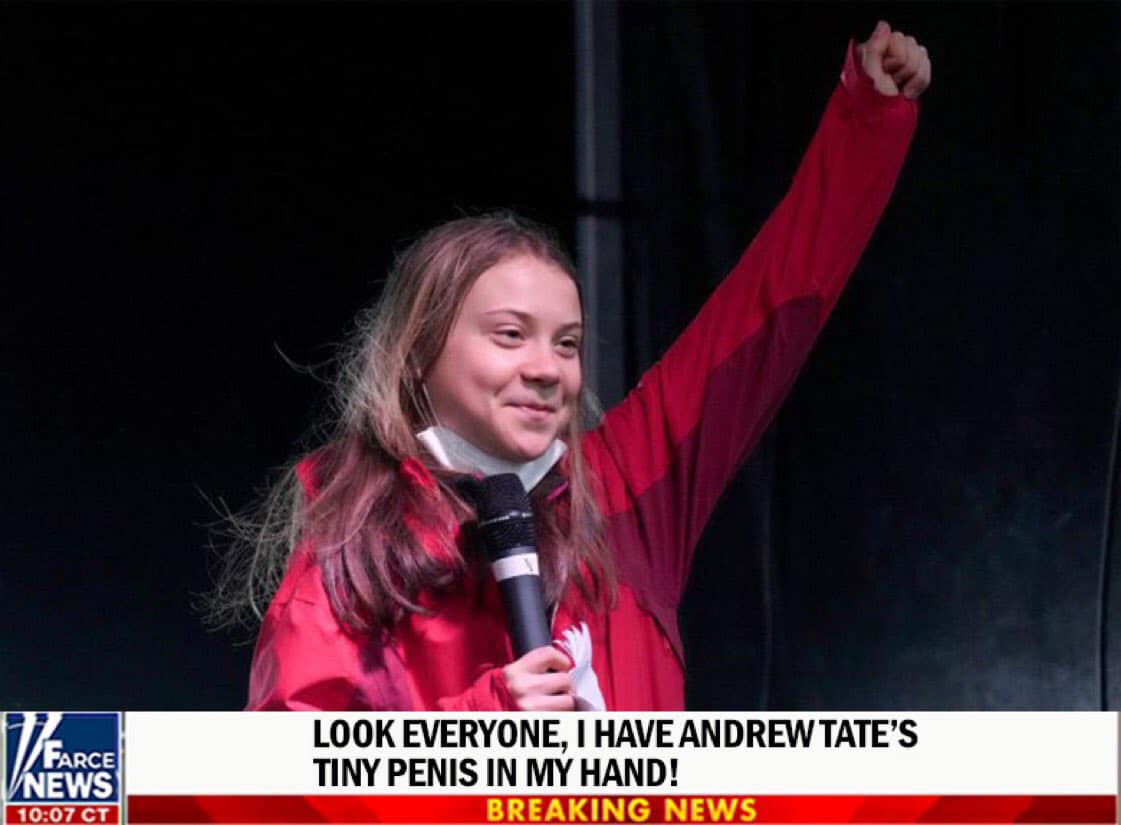 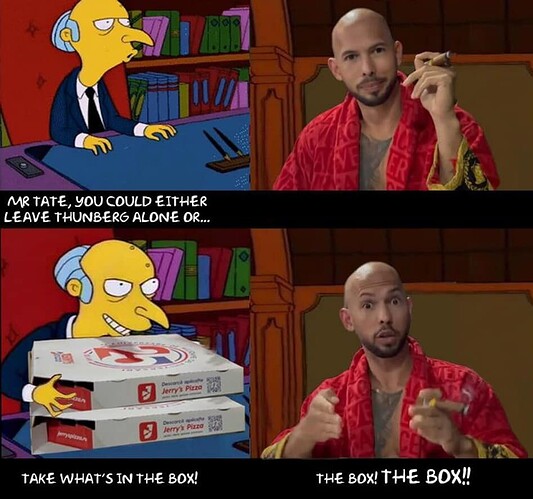 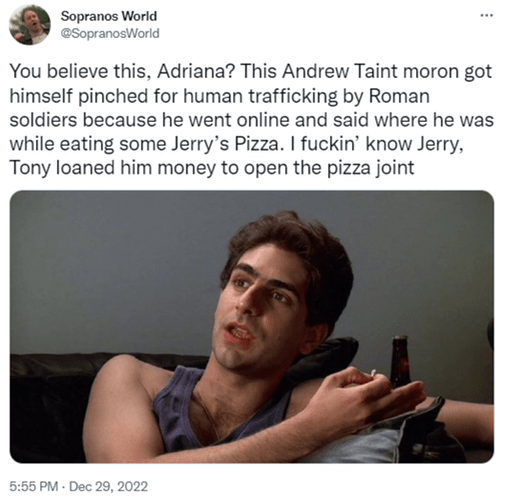 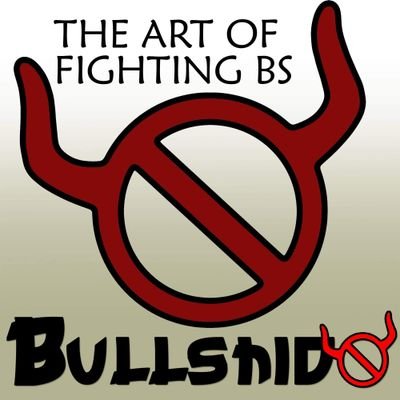 Valor pleases Crom. And the internet is full of dumbasses like Tate.

Someone actually had to “debunk” that Greta isn’t an actual Time Lord. 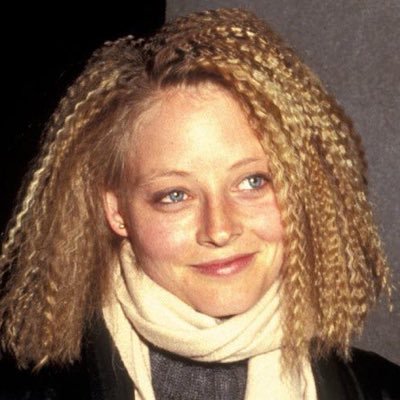 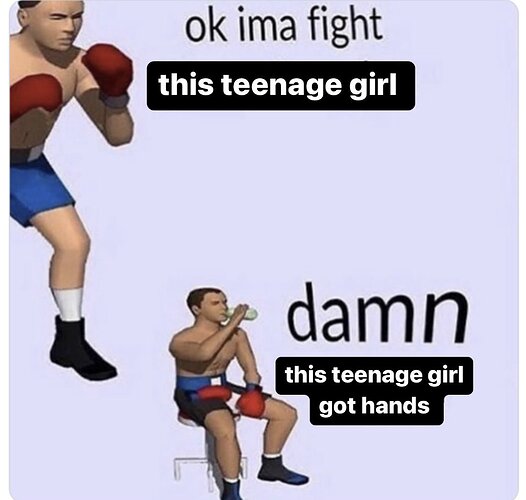 I heard he was a kickboxer. I didn’t realise it was shiny pants kickboxing.

over what kind of world his children and grandchildren are going to live in.

I don’t want my children and grandchildren growing up in a world in which they are economic labor units kept barely functioning through insect protein that has very high levels of parasites. 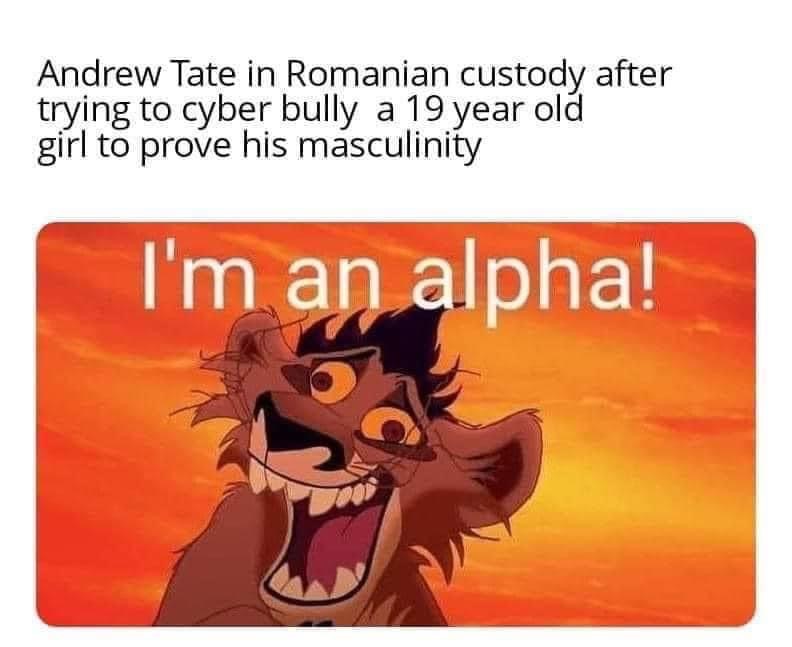 I have a dollar that says Thundberg’s Twitter account is not in her immediate control. This is just too rich for believability. Taint chases barely-legal Swedish activist online, while moving human flesh on the side?

This is a fucking show for our “benefit.” 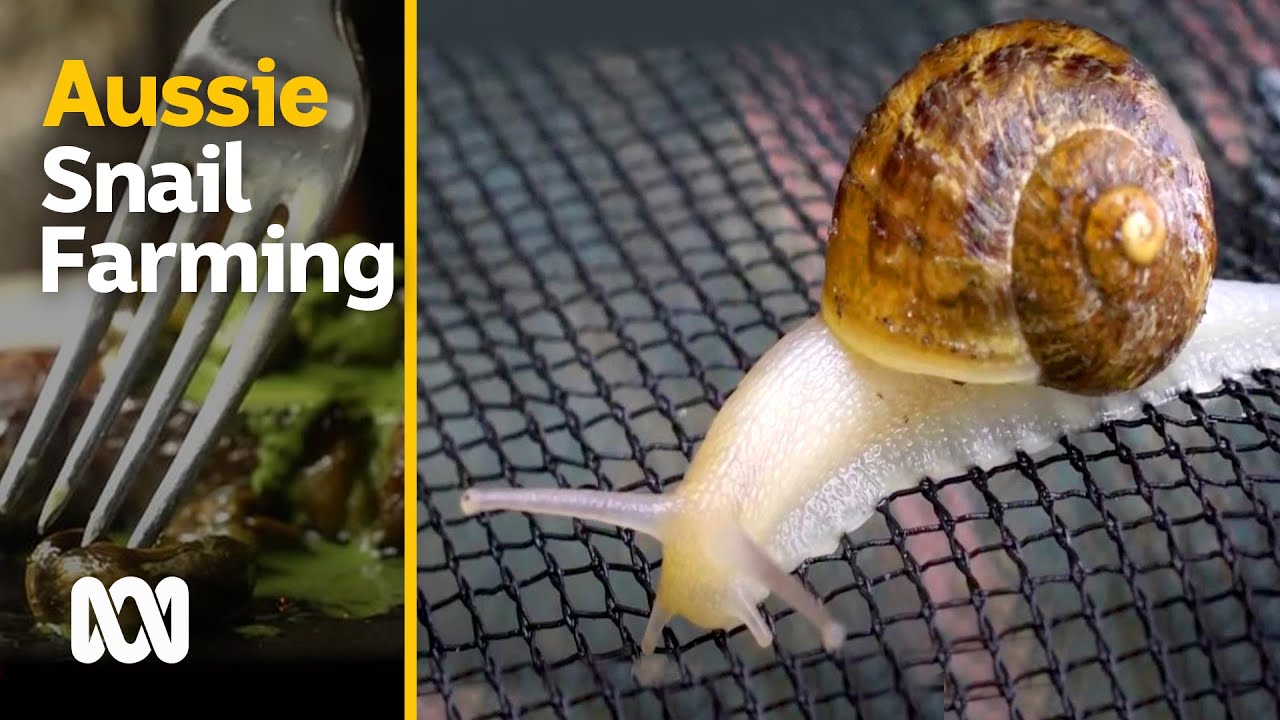 And y’all missed this too.

Broad daylight, search it out, before the Matrix Bros win.

'Group of Experts on Action against Trafficking in Human Beings (') is the monitoring mechanism on Human Trafficking established by the Council of Europe Convention on Action against Trafficking in Human Beings in Article 36. It stipulates that GRETA can have from 10 to 15 members of independent and impartial experts from a variety of backgrounds. They have been chosen from amongst nationals of the States Parties to the Convention and are known for their competence and professional experience in ...

Life being stranger then fiction?

Australia is the ur-example in the modern world of an economic zone wherein carbon based economic units live, and is governed by cosmopolitan, rootless elites. You can do whatever you want where you live, no matter how horrifying.

Australia is the ur-example in the modern world of an economic zone wherein carbon based economic units live, and is governed by cosmopolitan, rootless elites. You can do whatever you want where you live, no matter how horrifying.

How much time have you spent in Australia?

How much time have you spent in Australia?

I’ve spent more than enough time paying attention to Australian politics to give the assessment that they are even further along the GAE trajectory than even we are in the US.