The screenwriter, director, and producers of Wonder Woman 84 were apparently so committed to the 80’s aesthetic and nostalgia that they paid homage to all the other sexual assault in films from that period.

Is Steve Trevor also raping the body he is inhabiting?

I allude to this in the piece but wasn’t sure it explicitly fits the definition of rape since I can’t find a single legitimate academic or legal take on someone getting laid while magically inhabiting someone else’s body and I swear to god, I actually asked a philosopher about this too.

Does the body owner consent to the take over in the first place?

Gal Gadot is goddamn stunningly beautiful, but WW84 as a movie is the literal definition of a shitstorm. Whoever came up with the arc for Barbara needs to be fired. Out of a cannon.

The movie had literally one cool scene.

“Rape is bad” is generally considered to be a universal virtue.

I we could consider a soul as an autonomus bot-like software, and the body being hacked a plain brute hardware; then the act of possesion, like getting in someones computer for your own business, may be seen already as a violation.

Then, if you upload yourself into someones hardware to use his universal standarized ports for lewdy purposes, without authorization for the upload, nor consent of using the plugs, it obviously is a violation and a sexual abuse.

I, though, could negotiate and even agree, like Whoopie Goldberg in Ghost, to download an aenima software if Gal Gadot was to be the plugged in beneficiary.

Specially if for filming.

On the other hand, being my hardware plugged through and forced with a spiritual hack, would lead me to swear an oath of revenge, or even call the Ghostbusters, and the A Team, and the Spanish Inquisition.

The key is lustful consent in all the parts involved.

Edit: 1 “forced” instead of “involuntary”, 2: typos and grammar

Id like to take this opportunity to give my unequivocal consent to being violated under these circumstances by any female of WW calibre as long as it is captured on 4k video and handed to me on a USB stick.

Id like to take this opportunity to give my unequivocal consent to being violated under these circumstances by any female of WW calibre as long as it is captured on 4k video and handed to me on a USB stick.

This kind of shit is why I’ll never get tenure, you cro-magnons. 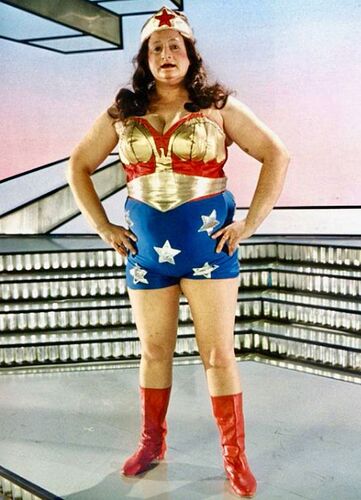 This kind of shit is why I’ll never get tenure, you cro-magnons.

First, when it comes to movies, I am easy to please. Sue me. I enjoyed WW84 as an escape for a couple hours. Seen worse - including the shit storm Army of the Dead on Netflix (yuk). I am NOT a terrible person for enjoying the movie.

Second and far more important, the double standard of sexual assault on men is so clear and available that adapting it to a mainstream movie without anyone blinking is not at all surprising. The problem lies not with the Men’s movement or any of the unwashed you mention (with too much vitriol, I might add), the problem lies in the victim mentality pushed by ‘some’ feminists and their proto-feminist ‘allies’ / apologists: men are evil, men are sick, men are violent, etc. So when men are actual victims, the blinders are up and it goes unseen. For example, as a person in the legal profession, I can tell you with certainty that male and female domestic victimization is about a 40/60 split. Sure, men do more to women, but are there centers to help men? Are there shelters for men? Are there dedicated resources for men? No. The system is blind to the issues, our society is blind to the issues, and Hollywood is blind to the issue of male victimization. Again, I ask why. I submit maybe it’s because a male cannot get an erection without a willingness at some level to make it happen, so penetration is not possible without willingness while women can be entered (painfully) without a willingness. So when a man is sexually assaulted, it implies that he was, at some level, a willing participant - and willingness equals consent at some level. Just a theory.

Moreover, since men are the preditors and the perpetrators of violence (and suppression, and dominance, and power, etc.) men cannot also claim to be victims. Such broad strokes are not helpful, but it seems that’s what’s happening. Hence the double standard.

So, as I have not watched the movie, and won’t be doing so, help a honkey out.

Steve whatever, the original Captain America, comes back to life in some other dudes body, somehow.

OK, If the other dude is dead, he can’t consent. So no need for consent. It’s a moot point.

As long as Steve consented, it’s all good, regardless of whose body he is in.

I mean, did the dead dude know Steve got “reanimated” (lol).

You have to realize, you are such a pop culture nerd, a lot of us don’t follow this stuff.

Unless the guy whose body got reanimated was somehow conscious of that happening, how could it be rape? And maybe he was glad he was getting laid by Wonderwoman, who knows?

, I can tell you with certainty that male and female domestic victimization is about a 40/60 split.

I’d love to see the stats to support this

Whilst men are victimised, men are overwhelmingly the perpetrators of both domestic and sexual abuse Feminism is not the problem here

Someone apparently deleted their entire account after posting this? Not sure what happened here.