Walking into the black hole

The enemy that this nation faces wants me dehomed, fired from my job and kicked out of school. Their work is an endless black hole of destruction. (Un)Fortunately, the IBJJF has already done all that, for no good reason, and I have no family left to attack in the aftermath. I’m gonna walk smack right into their black hole this Sunday, consequences be damned. It’s been arranged that I tell the truth about the destruction of my home, the wrong I’ve done in the aftermath of the destruction, and about the nationalist path I walk today.

That being said, if anyone would like to get in front of this and lie about your role in my origin, this is the time. They may take some time to locate me as I do intend to make them do it, but the plan is that I can suffer no greater harm, giving me the ability to move freely. And I’ll simply tell them the truth about why I’m fighting when they get here.

And… Once again, outta batteries. God damnit. The revolution will not be televised apparently because I can’t keep my equipment charged. Which defeats the purpose. I guess I’m not starting a dox fight today. I also had a weird nightmare where everyone got stabbed so I think this is all a sign to stay the fuck home today. I hate when my common sense and fate overrides my super villain plans. When Kangz launches, shits going down, but not today.

Went in anyways. Got surrounded by like a hundred dudes, but found a window to escape. Did two interviews. One on the trans youth scandal and one on how I allegedly decked an Antifa. It’s hilarious. He really thinks I hit him and it’s on video. But the video shows me approaching and him going down. Not me punching him.

The art of fighting without fighting

The art of “someone else hit him”.
Man, shit went DOWN the other day. 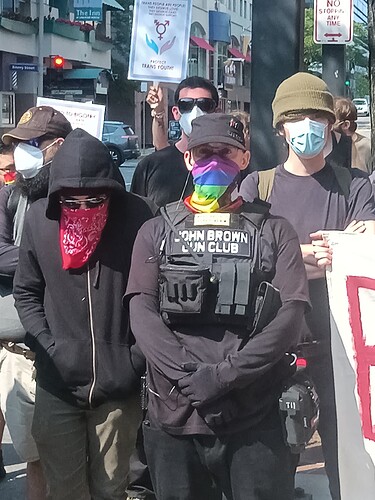 And man, you guys wouldn’t believe how expensive it is to fake everything I do. Actors, costuming and then CGI for the crowd shots.

Is the human up front actually open-carrying a pistol on their right hip?

No. I think not. I think its pepper spray. According to their twitter accounts they keep their weapons in their bags.

Oh, concealed carry in Boston? hmm, I looked that up, let’s hope they don’t get caught doing that.

They’re not even allowed to operate in the state due to militia laws.

Well, they were there protesting/protecting in Boston during the whole trans-kid kerfluffle… Which is where that photo you posted from, right?

It’s Rhode Island GBGC, though, or was it Vermont. They all basically decentralized after the initial kansas based one (which was white-supreme oriented) shut down.

Offshoot of Redneck whatever…

It’s RI, Bay State and Conn, all basically reactivating. We actually tracked them physically and online to a number of events and plots.

Yeah, I found them after the Boston fiasco, with their photos posted, LOL.

Curious as to what they think they will do with a fire extinguisher full of pepper spray when a ruckus happens.

It would probably hose all their friends.

It would probably hose all their friends.

More than probably. It’s very common to get blow back. Just touching a spray device can get it on your hands and wherever else you touch after.

Yeah, we carry anti-bear spray up here when out in the woods, hiking or hunting outside of dead of winter. OC will fuck you up…

They make a foam version, but it’s still wicked stuff.

Yeah. I was thinking the foam. But i wouldn’t want to hug a giy with pepper foam all over him.