I’m not the biggest fan of the cliche opening “can we talk about…” but it applies here. Because once we have a conventionally dysfunctional administration in place (as opposed to an extraordinarily dysfunctional, kakistocratic one) China is problem #1 of foreign policy.

For example, this was posted today: 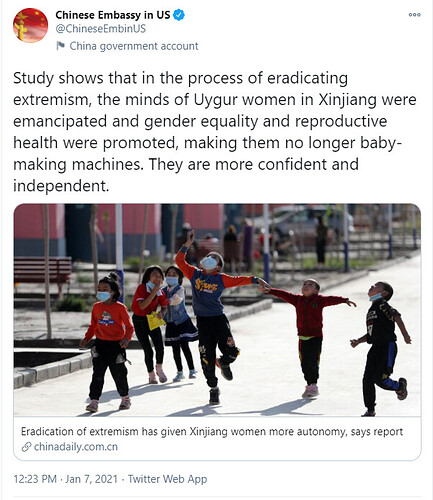 Well, I was listening to a interview yesterday, was on NPR. The guy detailed how Xi or whatever his name is has totally transformed China in the general mold of how it was under Mao.

Western democracies are addicted to the cheap goods, and democratic cash is making China great again

Thier militarisation of the South China Sea, moon shots and concentration camps are funded by smart phones, lap tops, car parts, and toys 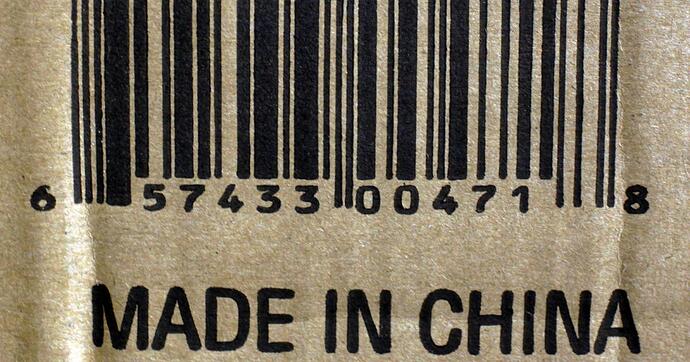 I believe external influence only goes so far, unless it’s involves some kind of take over.

I heard good arguments outlining how a rising Chinese middle class could actually bring change for the better to their government.

If more of the populace become affluent they might now have extra time to idk… question their government.

I believe the real change will need to come from within.

My friends trying to get themselves and their families out of Hong Kong disagree.

China, in my opinion, is our number on security threat.

What sort of foreign influence do you think could pressure their government to change?

Oh man. How much time have you got, in years?

My friends trying to get themselves and their families out of Hong Kong disagree.

China, in my opinion, is our number on security threat.

Some of the ALPHAs on the forum won’t like this, but the #1 problem in China is patriarchy.

Men have always ruled China. That’s why there are so many, and such a large ground army, even though they’re a source of some of the world’s greatest poetry, art, and philosophy.

Communism arose in China because of men, in the same way that every dynasty arose before it. If anything China is not at one with itself and hasn’t been since inception, which is why so much Buddhist, Taoist, and Confucianism literature focused on finding “oneness”.

The solution is not pressure. It will take many more centuries of understanding between their cultures and those they see as outlanders. The good news is there is plenty we have in common, like food, martial arts, movies!

The reason Xi has converted back to the days of Mao (other than all the faux capitalism) is to avoid outside influences changing things.

From inside or outside.

Probably gonna end up fighting them anyway. Will be ugly…

This is true. The more information coming from and contact with the Western world the more they get a taste of what they’re missing.

China will eventually implode. Companies have starting pulling out. We can’t compete here at home but there are other countries wherein we can have products manufactured.

They do own a huge portion of our US debt. If they called it in, the US dollar would collapse. But it would be a great cost to them. They plan on being number one soon and have working to that end for decades.

They don’t want that regardless of their saber rattling. It wouldn’t be just us against them. If they can do it through economic means it’s a win win for them. They’ve been subsidizing their industry and manipulating their currency to that end.

Outgoing Bad Orange Man was the first to stand up to them. Was one of his policies I favored most. Now we’re, I’m afraid, going to see a slide back.

This pandemic has hurt them too. It’s also shown a glaring light on weakness in our supply chain. From raw materials to finished product. Not to mention things like rare earth elements and others.

Thanks for your insight.

We def need to get away from being a trading partner with them. As does the rest of the world.

Naw. There have been many powerful women in China’s long history. Go hang out at the dinner table with a family. China isn’t the middle east.

Probably a reason why China came out with that new weird social scoring system, was due to encroaching western influence.

But tariffs are not a good form of economic influence. Taxing your own people to get tough on china is stupid.

Anybody know of someone that needs a brilliant tooling engineer with a law degree from England? He’s a patent attorney and rock solid human being. PM me. Is one that needs to get the hell out of China and has a British passport.

Just putting this out there because we’re from many places knowing many people.

@W.Rabbit watches a lot of Chinese movies. That’s where he gets his info from on the topic.

Have you been paying ANY attention to what Xi has been doing to China?

What would you propose to level the playing field?

And is probably the only one in this thread who has been in a lion dance.