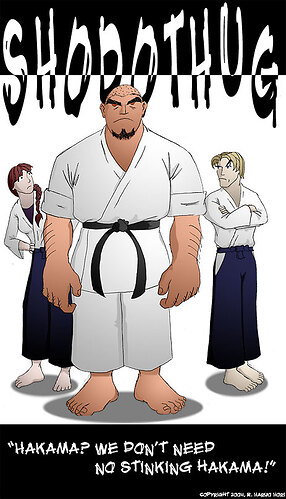 I don’t know what I’m going to say I’m going to be everywhere. I started going to a MMA school. I go to Muay Thai and BJJ Gi and no gi. I come from a Judo and Aikido background. People ask me what I did before. I just tell them I did judo. One guy when we were doing no gi said I was really good at controlling his wrist. I told him I learned that from judo but in actuality I learned that from Aikido. I’ve been throwing people consistantly in BJJ usually with Aikido. I’ll get to my judo in a little bit. What I never realized before coming to this school was how horrible my judo is. Everytime I try to throw someone with judo I fail. I was doing muay thai sparring and I tried to do uchimata on someone and they hoped on one leg to not fall down. I could have kicked his leg to knock him down but I was in so much shock that he didn’t fall down. The people in my school have shitty takedowns and shitty takedown defense. I’ve watched Gracie self defense videos and it’s commenderable that the BJJ person was able to defend themselves in that situation but the way they got him to the ground sucked. The people in my class aren’t much better. People who have taken judo for two weeks are better at taking people down than the purple belts in class.

Other than that I really enjoy it. In Judo everything I wanted to do was illegal. In BJJ I have so much more freedom. I’ve even asked people if the techniques I was doing to them was legal because it’s defenetly not legal in Judo. They always say it is. There are only two guys in class who have taken me down. In no gi I was up against a wrestler and he took me down. I overheard him talking to someone and he was talking about how hard it was for him to take me down. He usually doesn’t have to work that hard for the takedown. The other guy was breakdancing on the mat and I got ankle locked. In Muay Thai I tried to use Aikido and everything I tried to do worked except for gedan ate. I did gedan ate to someone in judo so I know it works. I think I’m not used to the distance.

Wait, y’all didn’t do live throwing in Judo? How did you not know people don’t just fall over?

I went to a normal judo school. So of course we did randori. Why would they just fall over in BJJ or Muay Thai? They’re really trying their best not to be thrown. I don’t understand the question.

But in the story you seemed surprised he didn’t fall over. I don’t understand what happened.

Sorry I didn’t explain it very well. I was surprised in Muay Thai sparring that I didn’t throw him with this throw called uchimata. I’m using the word “fall” and “throw” interchangeably. Basically I’m surprised I wasn’t able to throw him. I thought my judo was better than it actually is.

I don’t think that’s what happened. Your judo is probably fine. The thing is, it looks like your coach didn’t teach you about insistence, or throwing combos.

I thought my judo was better than it actually is.

That applies to most of us and our respective martials arts. Or maybe just me.
I once used to think I knew a decent bit a judo. I was seriously kidding myself.

How long had you done Judo, and to what level (belt, training time, competition experience)?

I once used to think I knew a decent bit a judo. I was seriously kidding myself.

That would be my experience with people who have not dedicated a lot of time and effort to Judo.

We drilled combos all the time. I knew I could footsweep him after my uchimata but I thought my throw was so good I didn’t need to follow up with anything. I was basically surprised my throw sucked.

ow long had you done Judo, and to what level (belt, training time, competition experience)?

Sorry for the chain of replies. I’m not used to posting on this site. My experience with Judo is
negligible. It’s really not worth mentioning. I’ll I can say is that I’m a nikyu and have done judo for a few years. You didn’t ask this but I’m a nidan in tomiki aikido. Even though I’m a yudansha I don’t feel like I’m very good. My competition experience in both arts isn’t worth mentioning. I’m honestly not a strong competitor.

Sucking at Judo is guaranteed.
See the Riddle of the Sphinx.

You have to learn to apply stuff in context, judo or aikido. Tomiki and Judo go together pretty well from what I’ve seen…

Keep working on it !

Thank you BKR I will. What do you mean by apply stuff in context? That’s kind of hard to do since I’m using both at the same time. For example judo is preventing me from being thrown or taken down but I’m using aikido to throw the other person. I’m sorry if I’m misunderstanding you.

Of course judo helps me the most since it’s BJJ and everything. But in judo I mostly learned how to escape from pins and to pin the other person. We hardly went through submissions at all. I was weirded out when I used kesa gatame against this blue belt and he just relaxed and just laid there. I understand he was just waiting for me to try to apply a submission but it was still weird for me.

Thank you BKR I will. What do you mean by apply stuff in context? That’s kind of hard to do since I’m using both at the same time. For example judo is preventing me from being thrown or taken down but I’m using aikido to throw the other person. I’m sorry if I’m misunderstanding you.

Doing an appropriate Judo or Aikido thing in MMA or BJJ is what I mean. Adapting what you know to the situation at hand.

I went from Judo to BJJ. I absolutely did know a lot of upper body submissions though, as I’d been doing Judo almost 30 years when I started BJJ.

Pinning/controlling is very important in BJJ, it’s good you can do it.
I already knew a lot of pin to sub transitions, but my BJJ coaches knew stuff I’d not ever seen before, so it was fun to learn.

Also, you can stay on top and move from pin to pin.

Your BJJ coaches should be able to help you with the submissions.

I once used to think I knew a decent bit a judo. I was seriously kidding myself.

That would be my experience with people who have not dedicated a lot of time and effort to Judo.

Yes, I was an outstanding example of the truth in that old saying: a little knowledge is a dangerous. To yourself in particular I’d add.

I had once-a-week judo instruction for barely a year while finishing grade school. Afterwards during my years in karate practice I found what I remembered to be useful for the self-defense parts we trained and puffed my chest up at having a superior base to others because I had “trained judo”.
Then one day I did randori with a friend and fellow karateka who had gone to brown belt in judo. One kata-guruma later I was made aware of my basic you-know-nothing reality.