I trained in silat sendeng Haji Hamid in the UK for around 8ish months a few years ago. It’s a form of silat from Malaysia which has both open hand and weapon forms. I left due to personal grievances with the instructor but feel like I know enough about the martial art to discuss its strengths and weaknesses.

My background – I have been training in martial arts since I was 5 years old, but mainly have been focused on Muay Thai. Back injury and weight gain kept me out so by the time I was ready to start training again I decided to give silat a go.

The format I feel wasn’t right for training, it was one weekend a month with very little/ no contact in between, plus the instructor was often too tired to train with full intensity because he was driving from south wales (around 200ish miles away) to come to training. I understand this has changed now with a lot more interaction and training between sessions.

I think its weapons forms, especially knife attack/ defence are very very good. I understand that there are a range of weapons within the system but I only really lightly started on swords and saw a demo of knife work. It is a shame that these were not taught in the initial 12 month course as I think they would have been way more useful in the UK and attracted a lot more people to train.

It has a very interesting and rich history, so you feel connected to a long line of martial artists down the centuries with a good lineage of kuntao and sendeng forms of martial arts.

The main weakness, I feel, is the rigidity of the open hand form. What I mean by this is that the stance requires you to lean very far forward, beyond your centre of gravity, with your chest over your bent front leg, back leg straight and braced against the floor. Like a karate stance with leaning forwards. This would make sense if you were holding a sword and shield, and needed to hold a shield wall, but I honestly think that not being centred leaves you really wide open to leg attack from just about any decent fighting system. If you think blocking a muay thai fighters leg kick with your arm is going to work, all you are going to do is have your arm broken. As a stand up form, there is also the usual weakness associated with any standup form about what to do when a grappler/ wrestler takes you to the ground. You cant just say “don’t go to the ground” or “if someone shoots for my legs ill punch the back of his head” because people are already trained how to counter these.

The second main weakness is the total lack of sparring. Drills and katas (called pelebats) are useful when learning basic moves, but you just cannot expect this will be all you need to learn if you were in a live fight situation. Trying things you learnt against someone that does not want to be hit by them is the only way to learn how to fight. It’s the only way to test a systems effectiveness.

Sounds like you got a chip on on shoulder bud. You don’t need to disrespect an ancient Martial Art like that. From the looks of it ur just a typical student with no discipline or dedication and probably pissed you didn’t get in shape blaming the sensei. “A good craftsman never blames his tools” Martial Arts is a tool and a way of life, they’re all different and unique in their own way. None of them are bad or perfect. I see it everywhere people with ‘shiny object syndrome’ that jump from one thing to the other never having discipline to fully learn and properly master one.

Relax buddy leave me out of this Iv got nothing to do with it. Just gave my opinion lmao

Iv come on here as your insulting Silat. I train Silat Pencak and the way your describing Silat is no way near how it actually is! No martial art deserves to be disrespected in the slightest. Best of luck with your shit storm buddy.

Please note that per @MuhammedAli request, I have made a revision to OP. The original version is archived, in case it needs to be referred to. Contact a mod/admin if you have a valid reason to see that post. 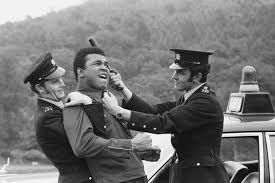