Definitely a funny guy. Definitely the most wildly successful broadcaster, ever. Definitely a firebrand, and absolutely a guy that could divide a room with his name only.

Rush Limbaugh succumbed to Stage IV lung cancer, today. His I think 3rd wife made the announcement on his regularly-scheduled program just a bit ago.

Now, let the people who want to be forever known as cheering on the death of somebody that was many times over more successful than they will ever hope to be commence. I can’t wait until Trump dies, it will be even more epic than what is about to happen, below. 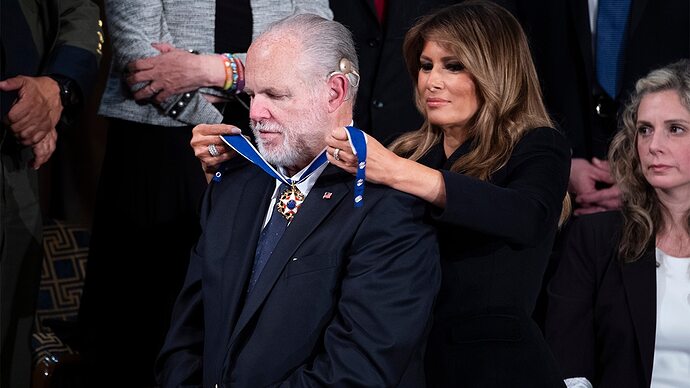 Rush Limbaugh, the monumentally influential media icon who transformed talk radio and politics in his decades behind the microphone, helping shape the modern-day Republican Party, died Wednesday morning at the age of 70 after a battle with... 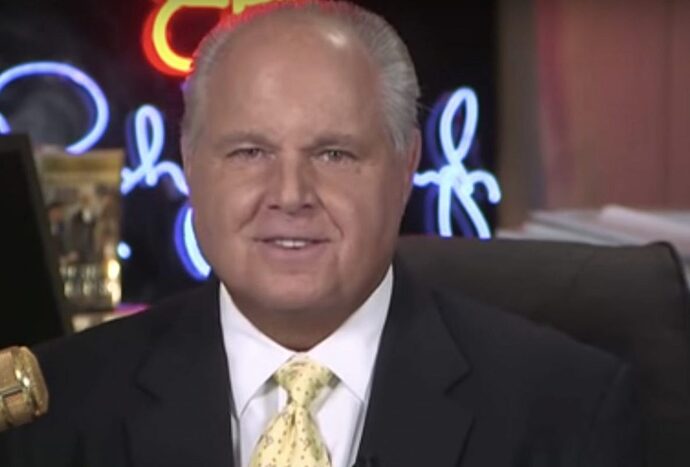 Conservative radio giant Rush Limbaugh has died, following a bout with lung cancer. His wife Kathryn made the announcement at the outset of his radio show Wednesday. “It is with profound sadness I must share with you directly that our beloved Rush,... 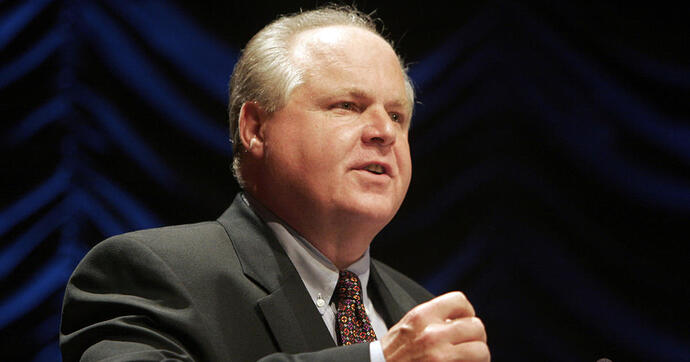 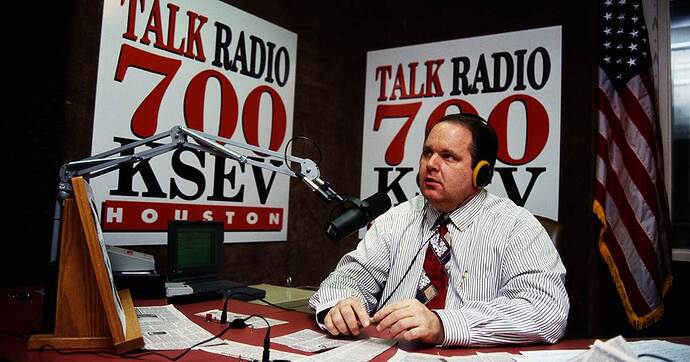 The Presidential Medal of Freedom honoree outraged critics with his long history of sexist, homophobic and racist remarks.

Yeah, he started in 1988, I used to listen to him when I was in grad school about that time. He was funny as hell.

This is a good observation: “He wasn’t William F. Buckley or a number of the conservatives that had been notable media pundits, who were very dry and very serious and very wonky. As a matter of fact, when Limbaugh started, he was funny. In many ways he was to the conservative movement what Jon Stewart would be to the liberal movement.”

Rush did some absolutely spot-on and hilarious parodies of the Clintons, among others.

As time went on, he seemed to want to be taken more seriously as some sort of expert on politics/culture. He did not fare well in debates with prepared “liberals”.

Because frankly, he was pretty much uneducated formally. As long as he was solo, or taking comments from mostly adoring fans, he was gold.

It’s hilarious, I was listening one day live, and he was spewing some seriously bad info about oil and gas industry, and where natural hydrocarbons come from.

I was literally dialing the phone to call in and correct him, when another geologist, got on with him and straightened him out. It was interesting, because Rush took it very well, and accepted the correction, live on the air.

But he did that kind of thing fairly often, as I recall. 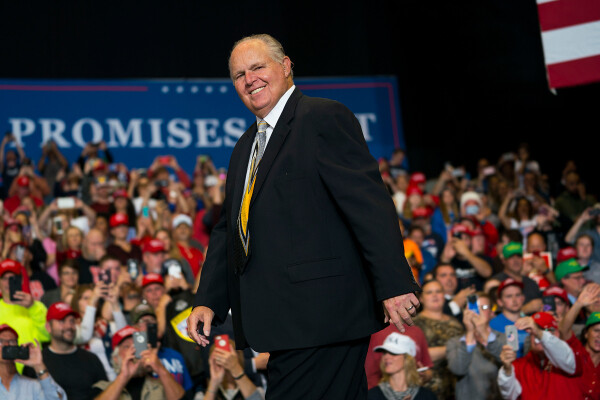 Rush Limbaugh Did His Best to Ruin America

How the right-wing talk radio icon corrupted the Republican Party, spread hate, racism and lies and laid the groundwork for Trumpism

As an Aussie I never heard a good thing about him.

I believe it was him who use to have a segment called “AIDS Update” where he made fun of members of the gay community dying from AIDS!

If the above is true then I cannot mourn or feel sorry for his loss.

True according to Snopes. It was short lived and he said he regretted it. But he did plenty of other scummy things. The world is better off without him.

My grandfather, a die hard Democrat and tank support sergeant who helped drive the Germans out the Ardennes Forest 76 years ago a couple weeks back, had Rush’s face taped to his personal toilet for a decade, before dying in 1994 from multiple organ failure.

RIP, Rush, you fucking piece of subhuman dog shit. Wherever you are I hope it’s full of brimstone, judgement, and electromagnetic radiowave oblivion.

Love him or hate him. I think it is shitty to denigrate the dead. Especially soon after their passing.

It’s the absolute best time, because people are going out of their way to rehabilitate someone’s image and change the narrative to one that doesn’t reflect reality.

It’s the absolute best time, because people are going out of their way to rehabilitate someone’s image and change the narrative to one that doesn’t reflect reality.

Someone’s death is the precise moment the totality of their life should be weighed, considered, reflected on, and accounted for; the good and the bad they brought into the world.

If my funeral is not like this I don’t want to have one. If everyone’s funeral was like this, somewhat fewer people would live foul lives.

This is why I had no problem shit-talking about John McCain. Romney is going to be fun, too.

The sum of his life’s work was angry denigration. He’s reaping what he sowed. People love and hate Howard Stern too, but you won’t see people cheering when Howard dies because he actually has a heart.

I’d start carpet bombing this thread with 30+ years of vile Rush spewed out of his fat, privileged mouth, but out of respect for the living, just Google it. Racism, ignorance, hate, lies, science denial, election denial, it’s all there and most of it isn’t very funny.

Aww man, these are great. 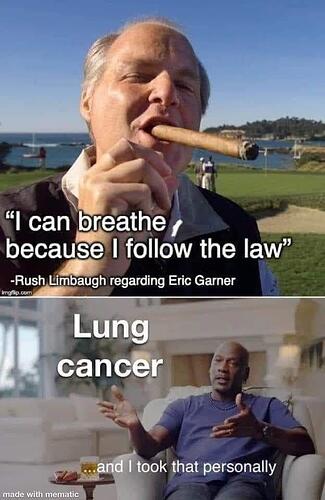 Love him or hate him. I think it is shitty to denigrate the dead. Especially soon after their passing.

Rush did an awful lot of denigrating the recently deceased. The man made his living that way. I won’t join the dogpile because he’s not worth it but I don’t think history is served well by allowing people to lionize the villains of the story considering how much scorn he heaped on people who were already suffering far greater than he did until the last few months of his life.

To me he and every other radio jockey like him from were /are walking violations of Exodus 20:16 Thou shalt not bear false witness against thy neighbor.

The way I always read that was not just forbidding lying but expressly meant not to slander and mischaracterize others. Of course, you’re the expert on the Old Testament here but I was always partial to that translation of the 9th commandment.

Edit: of course, Im not a believer anymore but what bothers me so much about people like Rush and that awful bastard Ed Schultz is that they were never anything more than vulgar liars making a career out of blurring the truth and making everything they touch smell as rotten as their personalities.

Again, here you go, trying to get some glory from your ancestors.

You mean Mr. Mormon, who will save us when the Constitution is “hanging by a thread”.