Not All Asians Are Chinese

There are a lot of Asian hate crimes going on and some of those admit that they only did what they did because he hates Asians because Asians caused COVID-19.
That’s the most stupid thing I have ever heard my entire life. Do they not know that Asia is a much bigger continent than Europe? Does it mean that people can blame all Europeans for the Spanish Influenza? Or pigs in Africa for the ASF? -_-

The real bitch about this is that it only takes one guy making one bad call to make all the difference between just another day and a hundred million global deaths. The math on that doesn’t work out in anyone’s favor. It certainly doesn’t work out for people looking to blame an entire population of people for the mistakes made by the junior statesmen of authoritarian governments.

Honesty, in all likelihood, the prime mover for this whole thing was probably just one or two guys out of all people on Earth who were, strictly speaking, “responsible” for COVID-19 making the leap from animal to human. The fact that this looks like a superbug and it showed up across the road from a national virus research facility means this shit probably followed some lab technician out of the door because he wiped his nose.

It’s unusual for a disease to make the jump from one animal to another everywhere on earth but it’s simulated dozens of times a day in a major research laboratory.

I think this was likely a catastrophic failure in containment protocol. Blaming the wet markets was idiotic. Humanity has had places like that since the first man domesticated the first farm animal.

Totally agree with you, mate. The only significance of finding who to blame is for the purpose of finding out what caused it and how to prevent it from happening in the future. But now that the world has become a bit more of a mess, let’s just stop making it worse -_-

Pure sociopaths. They don’t even consider the harm they could do for a moment and I doubt many of them care.

It makes me angry and upset to think about

Why did that guy punch Rick Moranis?

Same type of thing most likely, a power trip.

I feel so too. Then they’re denying that it’s just over that. Like they want to prove themselves they’re much better than others and they just thought of another reason to beat up people. I guess it’s similar to bullying… or it really is bullying

Why assume it was a guy?

Guy is sometimes used as a stand in to mean random unknown person. Gender is not being implied.

Ah, but all Chinese are Asian.

does it mean that since all apples are fruits then all fruits are apples? lol

If someone is half Asian and half Caucasian do they exist in both quantum states of ethnicity at the same time?

Not all Asians are Chinese and not all pr0n spammers get caught right off the bat.

For all you new people, “Hell’s Kitchen” isn’t as bad a place as it sounds. 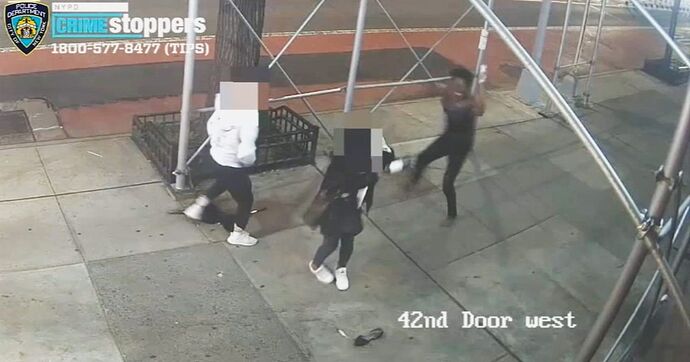 Asian Woman Told to ‘Take Off Your Mask,’ Attacked With Hammer in NYC

A 31-year-old recent FIT graduate was attacked by a stranger while walking with a friend in Hell’s Kitchen on Sunday. The suspect is still at large.

Not unknown. It was Shi Zheng Li aka, Batwoman.

It was unknown to me.