Joe Lewis: Karate (but not TaeKwonDo and Muay Thai) got it wrong; key to maximum power in strikes is straightening the supporting leg 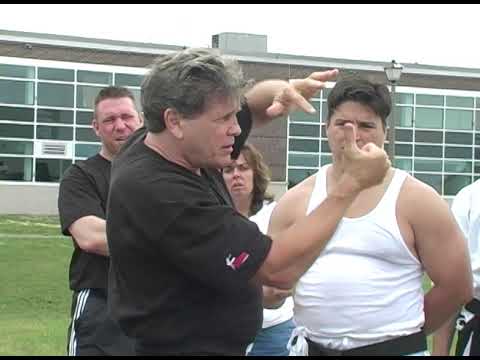 The push off from the back leg is at its peak fully straightened - the closer you are to that point,the stronger your rear technique will be.

As it happens, Karate taught to always bend the supporting knee, but not only does this put undue pressure on the joints,it also inhibits your transfer of weight.

Muay Thai and TaeKwonDo teach it to straighten, unlike Karate. So they got it right, whether they knew it or not.

Did you guys know about this peculiar fact?

Did you know that the techniques in kata are exaggerated to what you’d do in an actual altercation?

Because you’ve never trained to fight against a resisting opponent.

Joe Lewis forgot more than you’ll ever know about fighting.

You’re generalizing every karate style to be the same.

It’s bent in kihon too.

I was not the one who made the statement.

despite the fact you typed it in your opening post, which is the point i am responding to

I was citing Joe Lewis

Joe Lewis: Karate (but not TaeKwonDo and Muay Thai) got it wrong; key to maximum power in strikes is straightening the supporting leg

So name a japanese or Okinawan Karate style that side kicks like this. Is that you by any chance?

Also I’ve done Goju Ryu for almost a decade, so anecdotal. I will also stress that I am aware that Goju Ryu, depending on your organisation and if you’re in the Okinawan or Japanese orginisations, have some differences in technical aspects, how kata are performed and what bunkai are focused on, so I couldnt speak for everyone under the Goju banner.

Odd that your post has now got two things I noticed in your arguements:

One we moved to specifying side kick later

And secondly you seem to think me addressing what you put in your text, regardless of if you stated it originally or not, required you to get defensive about who initally said it, and missing the point that I have simply challenged the arguement. Not an attack on you, so no need to get all shields up

If Ngannou is impressed by this I somehow feel
he would worship me hehe A Taekwondo Champ STUNS The UFC Champ! | Francis Ngannou - YouTube

I also suspect the fact that it’s a hot girl has to something to do with it. She’s quite mediocre, as all women are.

I also suspect the fact that it’s a hot girl has to something to do with it. She’s quite mediocre, as all women are.

You are a no talent sack of shit.

“TaeKwonDo is the side kick”.

And they are right. You don’t know what a side kick is until you’ve seen TaeKwonDo. The outliers in Karate look more like TaeKwondo, and Karatekas admit this themselves… the supporting leg kick is ideally fully flexed when side kicking, which is why I posted one showing just that (well 99% flexed)…

The roundhouse kick has some benefits having bent legs for lateral movement, especially low kicks. Low kicking fully flexed doesn’t make sense. But the power principle is the same there too. If you go for broke with a roundhouse kick, you ideally extend the joints.

Boxing, you push off the supporting leg when throwing the cross and extend rather than bend the joint … Joe Lewis is correct.

There is absolutely nothing you have to teach me about any kicks.

You are a poser.

Note to the gallery.

I was doing side kicks before OP was born.

Not as “sucker punches”.

I bet she can break more boards than you

That is the user formerly known as Heuristic.