So, from reading this (linked post and the one in the replies), the guy’s doctor recently changed his meds and he started behaving oddly? A “funny turn”, as they say? 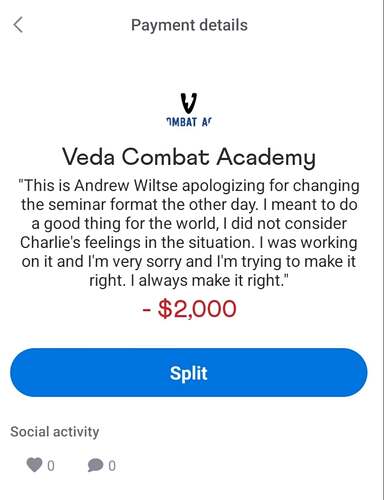 I don’t know why that turned into an image link. I tried to link to one of the replies in that Reddit thread…

So, should we use the standard approach for mentally ill jiujitsu practitioners and bully him to death? Thats the right thing to do, right? Doctrine teaches us to pick out the weakest of the enemies first, and he is in an organization that tried to kill me and my family to make a buck. They even used mental distress, which they caused, as justification. So if it’s justified to stalk and harass people because of mental illness, surely he qualifies. And he’s from an enemy crew. So… what should actually happen here?

I’m probably missing all the context here (not been here long), but would it be a hot take to say that people generally shouldn’t be bullying other people to death?

Why? His life doesn’t matter. I think we should, as a community, let him know that. We should also reach out to his friends and family and workplaces and let them know that. Then after repeated harassment of his connections, we can use his lack of said connections to prove to him how worthless he really is.

To what? All I’m gonna do is hop on telegram and train more white supremacists. The time to change the record was when people were telling blatant lies about me to ruin my life on behalf of two frauds. Now I have nothing to do with myself other than manual, brain dead labor, and white supremacy.

I can’t switch back to being another person, because I was never anyone but Tabor, the grappler. That was actually the real identity. I should be prepping my next class right now FFS. The irony is, had I been a fraud, I’d either just have gone back to my real job or ran another scam. But I never was. It also pisses me off that I could’ve transitioned into any legit industry, at that age, but chose BJJ. Now I have to live life as a black man in America with no education or trade. That is ridiculous. I literally work with people that feel the need to explain that if I have 4 items that 4 more is 8. And THEY’RE retarded. It took half an hour to explain that a 20x30 frame and a 30x20 frame are the same shit.

As much sympathy as I have for your personal experiences with members of the BJJ fraternity , constantly whinging about it is tiresome and counter productive

So what was the deal? He made purple belts do warm ups or something?

You’re tired of it? I’m tired if the entire situation, but its a permanant situation. You are so not the victim here. Besides, you want me winging. I could have told Gephi the same thing and this guy would be livng in a nightmare.

He went nuts with a white board and started rambling instead of teaching. He intended to keep this up for 8 hours before they told him to show BJJ moves instead.

But it demeans you

You are admirable in so many ways, but harping on does you down

No, building tents all day is demeaning. Not being able to use your name for professional purposes is demeaning. Complaining makes me feel somewhat like I’m being heard, despite the fact that no one cares. And being heard just enough makes it so that I’m not actively engineering this persons mental collapse. I have a computer program that helps automate and amplify the damage too, to destroy as many lives as possible.

Most people here care and support you

So I can suck it up

Maybe keep it in one thread as a compromise?

This one needs a separate thread because it doubles as SEO and the greater reach impacts the severity of the incident. By using search engine optimization and network analysis you can do serious damage to the victim of your cyber campaign. To eliminate a family and snuff out someone’s potential, you need some serious strategy.

Also, most people here kinda helped engineer this disaster, and in fact thought it was funny. If they cared, there’d be as many anti Souza comments as there were anti tabor, and people would be spreading the truth just like they spread the lies. They don’t care.

Most of us are clueless rubes

Nah, dudes know exactly what they did. Im serious about picking these guys off. Dead fucking serious. Gonna take my life from me, destroy my future, my home and my family, I’m gonna do the same. Absolutely disgusting scenario and its about time to do some damage. It was flat out never Carlos’ money.

I should probably leave him alone. That seems to be the right thing to do.

However, cyberwarfare doctrine says that people like him are easy targets and that traumatizing him may lead to a bad outcome. The bad outcome increases trauma in linked nodes, which then become vulnerable to similarly bad outcomes. This is how you deliver harm to thousands of people at a time, all of which are from the aggressor community, and thus valid targets. Perhaps someone should look to END the war, cause I’m down to WIN the war. Statements like "Your life doesn’t matter.’ while referencing alleged mental illness lead me to believe that the community thought I was suicidal and that they intended to kill me. My life DOES matter, especially to me, so firing back at clear targets, caught in the open, with similar intent makes sense. It’s not what I want to do, but maybe I DO have the right to say no to Carlos without penalty. And it IS war if I can’t refuse this predator. He’s gonna back away from my name, from my family, from my social network. Or I’ll start on the outskirts and/or most vulnerable of his network and then let the would be clientele know why this happening.

Actually, I’ll start with the pedos.

It’s good to have a hobby