Dude is out here actually robbing niggas. Thats the opposite of opportunity. You only need Gracie Barra to do shit because his men get extremely violent when he gives the signal.

This man is a predator using a cult to enforce his demands and to cover up the various crimes he orders. It needs to stop.

This is an example of a Carlos Gracie Jr victim experience: 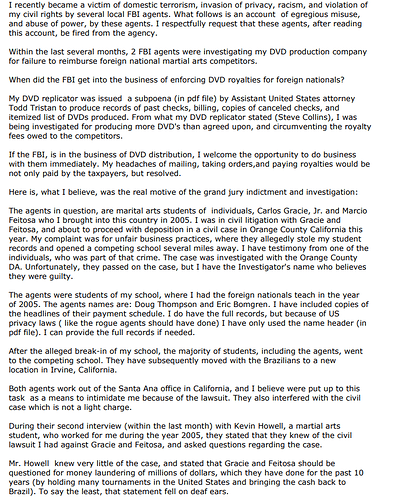 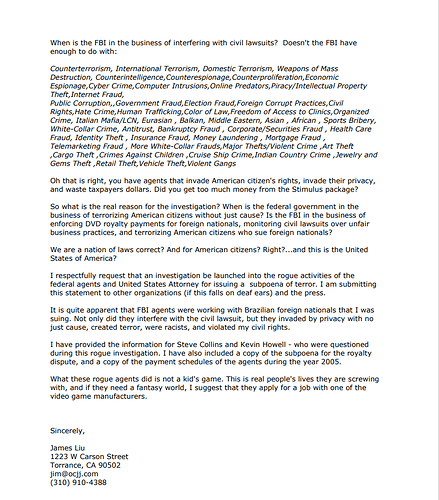 Notice that thats not me in there at all. Those are some of his OTHER monetarily motivated chimp outs.

Aren’t there several other threads in which you call out prominent BJJ people?

Do we really need another one?

I also have not addressed the terrorism issue in some years as it didn’t play well. People assumed I was crazy without taking the time to realize that these claims are completely independent of myself and come from other victims of other incidents.

I have no hesitations in agreeing with the tone of your post. What is the direction you want to take this discussion, though?

I dont know if anyone is super surprised to hear Gracie be accused of intimidation and manipulation. That much money and “legacy” is a powerful thing.
And I would hope that anyone with evidence to support that has already approached authorities, as it appears a few have done.

While it sucks that Liu is being screwed over by Gracie, and feels intimidated by an investigation into his business, regardless of the connection between the two, his statement feels deliberately inflamatory toward the FBI. I cant tell who it’s adressed to, so perhaps thats intentional, but if this is aimed at some kind of internal investigation team it kinda strikes as a 'I dont want to cooperate with subpeona because my civil liberties" crack.
Might just be my reading though.

That makes three total public accounts of this behavior. It’s time to say “No.” to Carlos Gracie Jr. People should be able to say “No.” to this man and still be safe. This guy uses his name and reputation to rob people and it’s not OK.

Thats easy for me to say, I’m across the pacific and have never dealt with the dude.
Unfortunatly manipulators who have money and influence are difficult to get out from under without significant help from others, including law enforcement.

I cant seem to find much with my basic google fu, its 4am so thats probably not helping. Any other articles or such that display the intimidation tactics?

The best ones would be the USCIS documents, which indicate that he is working as an immigration provider. The Department of Homeland Security found descrepencies on the inmigration documents of several immigrants under Carlos and then rejected their applications. On the rejection letters they reiterated the requirements. Carlos then proceeded to charge the immigrants to meet said requirements.

The original links are still available, but the poorly redacted PDFs they linked to are gone.

This is a well redacted version of a BJJ USCIS violation. So we dont know what organizations and individuals tried the scam. But this is a huge part of how they make money. They facilitate immigration on account of BJJ credentials which they sell for cash. Thank god the DHS is keeping these predators at bay.

In the name of efficiency

So, ANOTHER thread? Good thinking.