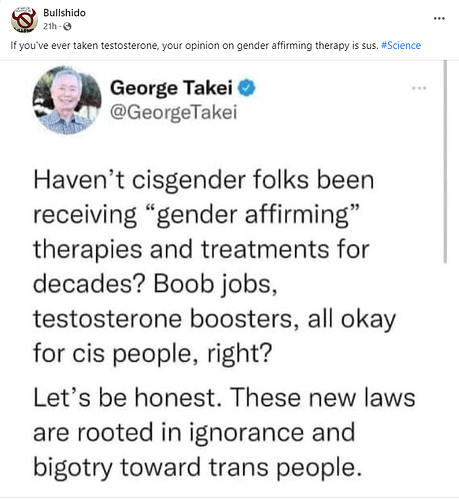 What’s the difference between gender and sex in this context?

Personally, I think the trans movement is ridiculous. At my job they have this crew I call “The plastic boys.” It’s a crew of ludicrously done up men trying to be hot. Every single night they show I get two men at the least asking one question. “Are those men?” Every single night. Cause there is no such thing as changing sex. Some people are fooled and then take a closer look, others are just curious, but they can all tell.

Sex can mean gender or the physical act of intercourse

Personally, I think the trans movement is ridiculous.

Trans is no less ridiculous than religion IMO

No, sex is your biological sex in this context. When a woman gets a boob job, she’s accentuating her sex, which is also her gender. When she gets a dick put on, she may be doing gender affirming surgery, but what cis people are doing is sex and gender affirming.

So is sex and gender the same thing in this context and if not define the difference?

Gender is how you express yourself, sex is what you biologically are. They can match, or not. So cis people adding onto their actual sex attributes is different from attempting to change sex.

Right, well put. You can’t change your biological sex. Not yet anyway.

You can’t change your biological sex. Not yet anyway.

It’s all about identity. A base truth like which biological sex one is born as (and yes, some medical conditions cause problems with that, but that’s not the topic under discussion) really doesn’t matter in the post modernist view of things.

What is the determining factor. And why.

I mean I know we could test for it genetically. But what purpose does that distinction make?

How often would the distinction really matter?

Depends on your self image I guess.
There is so many blurred lines between your sexual identity and your gender it would be hard to pick.

A lesbian who dresses mannish to atract women. Is being less of a female because?

I need people’s gender to be unambiguous so I know who to speak to when I need a sammich.

Gender is how you express yourself, sex is what you biologically are

That’s a fairly fringe differentiation of the terms, but a handy tool to discuss a complex issue

How is that a fringe differentiation? Kinda standard issue in such discussions.

I’ve never heard the two words used in that way

But I live a sheltered life