I am yet to build an opinion on this.

News in English for Rio de Janeiro and Brazil

Just not as much as the attached video.

Those are mean weapons. I mean what the bloody fuck, how did anyone supposed that it could end?

Forgot the Picture. A video capture from another video I got from a friend. 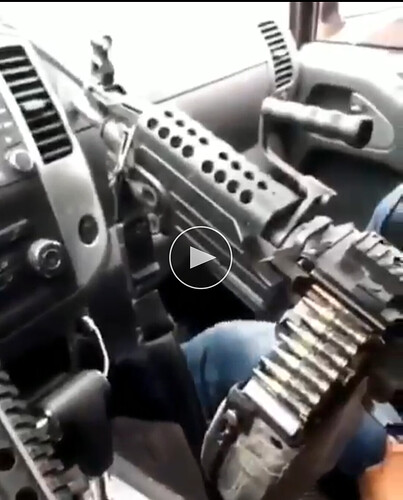 So I have tuned my ear to Brazilian Portuguese and I bet that those guys on top of the truck in the video are the Jacarezinho favela’s bandido crew themselves.

From the source it came, I would dare to say that it comes primarly from BOPE members, then shared to two other intermediaries before arriving to me.

That said leads me to be able to produce an opinion on the matter.

In my shallow analysing of the news of the Spanish Media about the subject I noticed that, at least one of the executions described in El País, could match a mob style revenge murder.

One of the victims of the bloodbath was found shot in the head while sucking his finger sitting on a chair. And was left in that position.

Now picture my elucubration, if you bear it.

It could have been like… barricades at the entrance in Jacarezinho, a LEO shot in cold blood in the moment of making space for the trucks to get in, heavy automatic fire being shot randomly by untrained shooters, retaliation to suspected informers ongoing while the BOPE advances into the favela…

I am trying to say that the police raid had clear objectives, that those were resisting heavily armed and that quite a few of the corpses are on the count of the resisting mobsters as executions of suspected snitches, and inner band fighting.

Then, of course, the lack of a ballistic forensic culture (to say it softly) in Brazil, makes the rest for the BOPE to look criminal, and blame it on Bolsonaro.

But I remember that even Lula did the fucking same use of brutal head hunting police raids for The Olympics “cleansing” of Rio.

And I bet these headlines win votes for the aggressive leadership that Bolsonaro wants to impersonate, despite of the international criticism.

Somebody said in the Facebook group that “Brazil is gonna Brazil”,… and keep Brazilian all the way.

Brazil is just general trash and so are their followers.

What do you mean by followers?

I do have to wonder, what is the right way to deal with extremely well armed violent gangs.

Without solving the causes of those gangs they will always be there but as they are already their now what will make violent well armed criminals stop?

Brazil has some serious gun control laws doesn’t it?

What do you mean by followers?

It’s code language for “Fuck the Gracie Machine” which I sort of agree with, reluctantly.