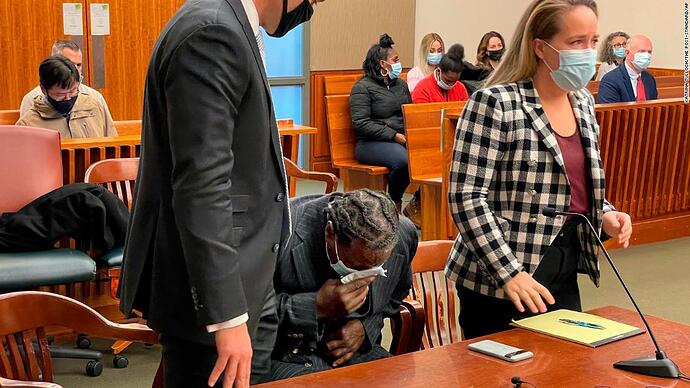 He spent years in prison for the rape of author Alice Sebold, the subject of...

For decades, throughout his years in prison and even after he was released, Anthony Broadwater insisted he was innocent of the rape of "The Lovely Bones" author Alice Sebold, a crime she described in her memoir, "Lucky."

That is a depressing story with no winners

I can’t imagine how frightened she must be about getting her ass sued into the ground and beyond.

I wonder what her net worth is?

Talk is cheap, she should be selling off most of her assets, or signing over any royalty checks she gets to him at the very least.

It depends on whether she believed he was or not, surely (CMIIW)

It depends on whether she believed he was or not, surely

The only thing we know for sure, is she ruined his life.
Ruined it.
And that the prosecutor coached her and her testimony, inappropriately.
The fact that it seems to have been a white woman, who falsely accused a black man of raping her, and then wrote a book about it, getting wealthy from doing so, is concerning.
What we don’t know, is was she raped.
What we don’t know, is whether the entire thing was racially motivated from the beginning.
What we don’t know, is whether Ms. Sebold had an idea for a book, thought she had a great way to lay the groundwork for that book to have a widely sympathetic audience, and whether that got away from her, and went too far.
What we don’t know is, whether this lady is a mentally ill loon.
What we do know, is she sent an innocent man to prison for a long time.
And could not pick out her “rapist” out of a line up, and flip flopped, allowed herself to be coached in her testimony, and sent an innocent man to prison, ruining his life.
Surely if there was a hell, that would merit a sentence, in hell, for a least a while.

And I hope every bit of the revenues from that book, and any movie rights to it, gets redirected, in their entirety, to the man whose life got ruined, as part of the promotional backstory that moved that book’s sales.

I would add, if I was the judge, I might also order Ms. Sebold to take a class, called “all Black people do not look alike, here is how you can tell them apart”
And it might be nice, if that Prosecutor was disbarred from ever practicing law again, and also had to pay civil restitution to the falsely convicted man, and be remanded to take the same class I mention above.

It’s one thing to be mistaken, and/or traumatised

The whole system let Broadwater down, but the prosecutor especially should feel some kind of consequence

And I hope every bit of the revenues from that book, and any movie rights to it, gets redirected

Maybe he’ll get a writer’s credit

It’s one thing to be mistaken, and/or traumatised

She may have been raped.
She may have been traumatized.
She may have made the whole damn thing up, knowing that it would give her book idea social and marketing traction.
If she made it up, the accusation may have gotten away from her, or she might not have cared.
We’ll never know.
All we know is she sent the wrong man to prison for years, and profited greatly off of the story of him being falsely accused as a rapist, and she allowed herself to be coached in her testimony against him to do it.
And that last one to me, is horrible enough, to justify her losing every penny from those books and movie rights, and those monies going to him.

She definitely owes him a big fat cheque

It also gives rape deniers ammunition, so it does matter if she made a mistake or made it up

The prosecutor has no fig leaf to cover himself, however

Would it have been a jury trial?

Would it have been a jury trial?

It also gives rape deniers ammunition, so it does matter if she made a mistake or made it up

And what, pray tell, is a “rape denier”?

And what, pray tell, is a “rape denier”?

I mean, the man in this case, who was falsely accused and convicted of rape, denied that he raped her, at his trial, and was denied parole several times, for refusing to lie, and not deny that he raped her, because he did not rape her.

As it turns out, after it was caught and exposed that she had falsely accused him, and gotten him imprisoned for years, for a crime he did not commit, Sebold just apologized, publicly, and denied that he raped her, as well.
We should be a rape denier, when false or incorrect accusations of rape are made.
Otherwise, we would be horrible people, or if those accusations are directed at our own person, as in the case of Broadwater, not denying that he committed crimes, with serious consequences, that he did not commit.
He should be a rape denier in that case, regarding his person, and so should everyone else, in the cases where false accusations of rape are found to have been made.

They will point at this and say “See! Those crazy bitchez do lie”

A friend of mine who was a remedial-teacher killed himself this year after being accused of sexual abuse by someone with a lengthy history of substance abuse and behavior trouble. It was completely a “he said she said” situation. I had warned him before about the risk of teaching teenagers with such records of trouble and the need to safeguard himself, but he never believed it could happen to him, yet we had discussed situations were obviously there were attempts to guilt/sob-manipulate him.

I wonder what the unknown facts here were. I held him in great regard and doubt he was guilty. Yet I did not witness things personally and one never knows. I just know that the girl, who had flunked her classes and failed to attend many of the tuition sessions, is now given a free pass, and my friend is dead.

the need to safeguard himself

In a teaching context my policy is never be on your own with a student, and preferably have a second adult present in the gym

So much of the “he said she said” can be alleviated, and so much of the risks to both parties can be mitigated if this rule is followed