Experts at the James Martin Center for Nonproliferation Studies (CNS) in California say they have found 119 intercontinental ballistic missile (ICBM) silos in various stages of construction near the city of Yumen, in China’s Gansu province. 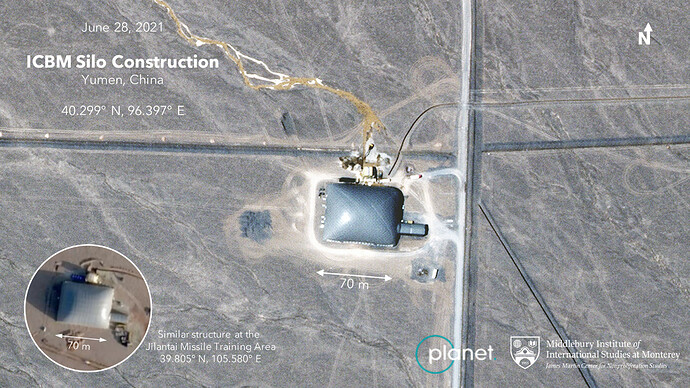 Researchers have noted the alarming nature of the discovery, but said China could be playing a "shell game" strategy to disguise its true strike capabilities.

Xi Jinping: China’s enemies will have ‘heads cracked and bleeding’ 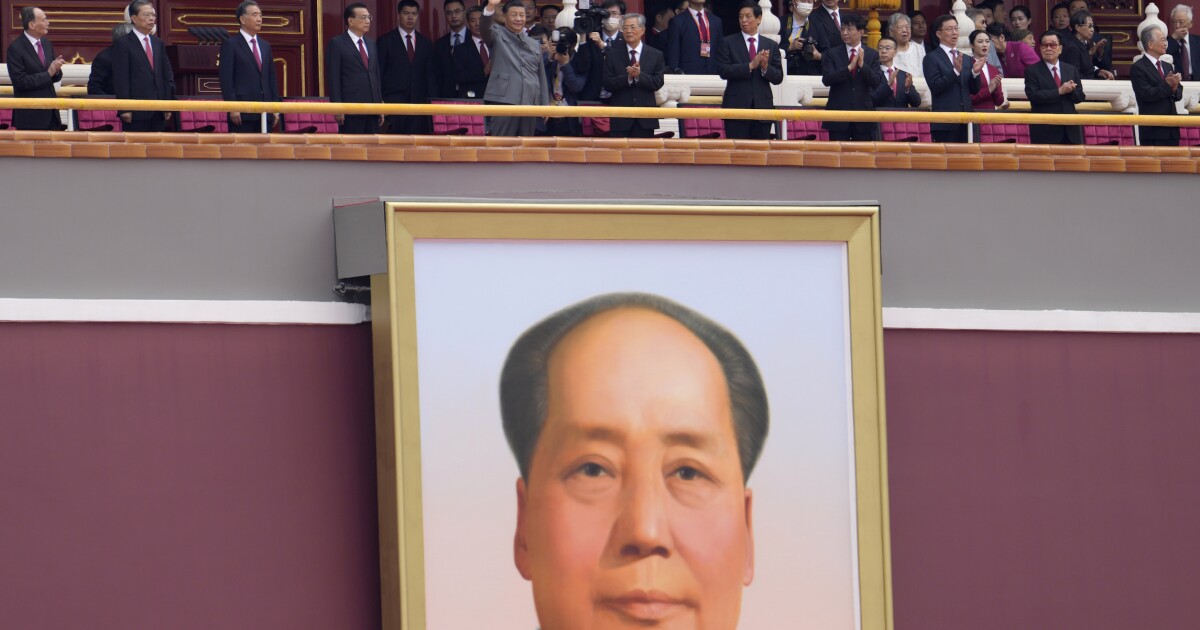 Xi Jinping: China's enemies will have 'heads cracked and bleeding'

China’s enemies will “have their heads cracked and bleeding” in any future conflict, the communist regime’s chief vowed during a speech marking the centenary of the Chinese Communist Party.

Putin’s primary weakness is the same as Trump’s. He likes to brag about the dishonest evil shit that he’s doing in real time for short term political gain with his legion of foreign and domestic dupes and he can’t help but employ sarcasm or sinister threatening double entendre in his denials. He’s an old school bragging sadist.

Xi’s primary weakness is that he’s following a Maoist spin on the Brezhnev doctrine which bankrupted the USSR under the reasonable belief that he can afford it and that makes him predictable.

Their greatest ally is the credulity of casual observers who lack the historical and political understanding to identify them as what they are.

This is a classic scenario from the last century and they’re practically following a cookbook recipe for undermining the West.

Using a heavy misinformation bombardment, find as many corrupt politicians willing to undermine their enemies as they can while continually seeking out weak links in the global coalition to expand soft and hard military influence.

They’re funding terrorists and directing them at us. Not the other way around.

I do buy that Donald Trump, or some other equally dangerous person might get their hands on the USA missile codes in 3.5 years so I can see why PRC would want strong deterance

That makes me think you don’t understand power politics.

Look next door at North Korea. Do you think Kim Jong Un has a lower standard of living than Chairman Xi?

Do you think Qadafi had a lower standard of living?

Putin and the Kremlin consider their slice of the planet to be their country and all the nations that border their country. It doesn’t matter how much real estate they take, they’re never satisfied.

God damn it, look what’s going on in Georgia (edit: not to mention Ukraine) right now.

Jesus Christ, you need a history lesson. Read up on Brezhnev.

Edit2: The Kremlin is still going off of the 19th century doctrine that says Russia is the only logical inheritor of the Roman empire. Their history books are one long grievance story about how the rest of Europe never treated them with respect. Look, man. You need to talk to some Putin supporters some time. I’ve spent years trying to talk sense into the ones I know and they’re still fucking nuts. They fly to pieces at the slightest suggestion that Putin’s violation of every other nation’s sovereignty is anything less than a God given right. WIthout context of what’s actually going on in Russia, you project your own value system and try to reconcile Putin’s actions into something that would make the most sense for your environment, your country. But that is a huge mistake. If Napoleon were alive today, Putin would only see them as competition. Russia views itself and bills itself as being the victim of European aggression for all of European history and the Kremlin uses this resentment in the same way that it always has: casus belli on the rest of the world.

Holy fucking shitballs. The Russian rightwing is so deeply indoctrinated against the West that Putin can murder their own citizens in the streets. Do you think they give a flying fuck about the citizens of other countries who stand between them and any perceivable gain either real or imagined? No, they fucking don’t. They lie to themselves about his money, cars, watch collection, endless parade of models and athletes that he’s fucking and still repeat lies they know aren’t true like he’s a humble servant of glorious Russia who would rather sleep in a tent in the countryside, live off the land and drive an old Ural into town once a month for supplies like some kind of Russian Grizzly Adam’s character. Shit, they talk like he’s Zhukov.

I won’t question your grip on history, but fears of China or Russia starting a nuclear war are pure paranoia and totally self destructive to either nation, both physically and economically

Information warfare seems to be the new battle.

Quality education for a populace is a matter of national security.

Quality education is the cure to all of societies ills IMO

Honey Badger don’t give a fuck.

Russia partnered with Lukashenko to abduct an American lawyer without due process or recognition of his rights in order to declare a wild conspiracy theory that the FBI (!!!) and the CIA were planning to murder him and his children. 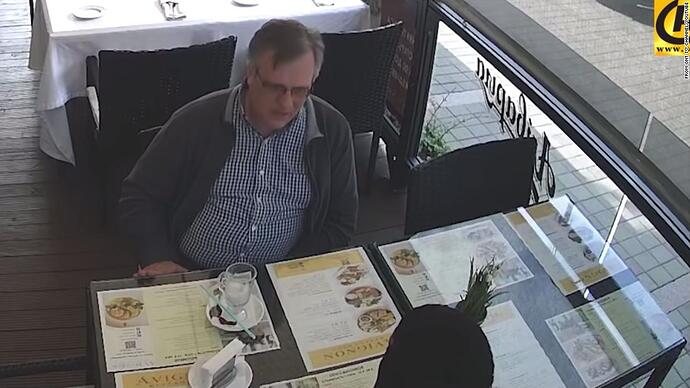 An American lawyer went on a lunch date in Moscow. Now he's languishing in a...

When Youras Ziankovich, a lawyer with American citizenship, returned to his Moscow hotel after a lunch date with a friend in April, he found four men waiting for him in the street.

I have no doubt that Trump will side with Putin again on this one or just forget that Putin was involved entirely like he does whenever he trash talks China without ever breathing Chairman Xi’s name in order to drum up domestic nationalist but utterly empty jingoist media fodder whose obvious purpose is to rally communist nationalist fervor around Xi and further isolate American interests as a twofer benefit to maintaining the support of the hostile foreign intelligence services of every major and most minor authoritarian regimes on Earth.

You will note that while Russia and China both love to insult every American leader by name except Trump, that Trump doesn’t insult them and instead individual praises all of them as though they were his best buddies.

Meanwhile all the sober minds keeping the ship afloat in America don’t insult them at all but that doesn’t stop any of those groups from trash talking them. One of these days the Republican party will cease to be led by a bunch of gullible and/or spineless sad sacks of garbage but I’ll probably be mostly or completely dead by that time so there’s no chance in hell of getting my vote back. Ditch that treasonous sack of dog shit before it’s too late.

He’s not on your side. He’s on his side. He’ll only ever do things in your interest by incident of his own path to dictatorship and more foreign money. He’ll breed as many enemy of the state fellow insurgents as he can in the leadership until his dying breath because he’s already past the point of no return. There is no admitting it now. He’s got to commit all the way for the rest of his life and anyone fool enough to believe he was ever interested in supporting their interests better share the same last name and have popped out of one of his many broodmares.

According to Trump, he still is.

And somewhere around 50 million Americans believe he will be reinstated in August, and at least half that number believe violent revolution will be necessary if he’s not.

Wish it was all a fantasy but the cult programming makes it real and deadly serious, so much so DHS issued two warnings just last week.

Well, if all 50 million of them get armed and show up, there will truly be a problem.

But that’s not going to happen.

The DHS is pretty worried it might happen, just on smaller scales and more distributed.

Last night it was 200 marching in Philly. A couple days ago, it was a dozen anti-government “Moors” prepping for the Boogaloo right off the Massachusets I95 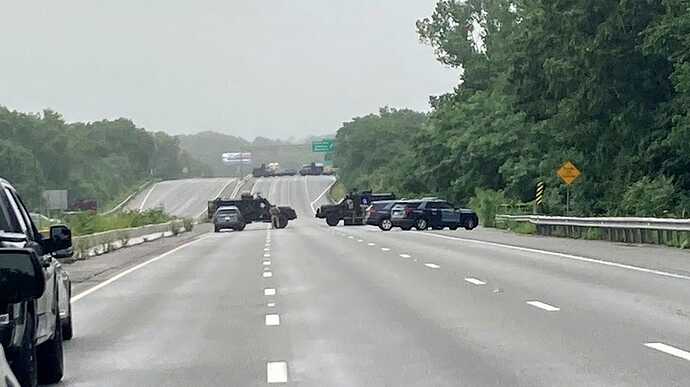 11 arrested in Massachusetts standoff: Here's what we know about the group...

A standoff on I-95 in Massachusetts ended with 11 arrests. Here's what we know about the group involved, the Rise of Moor and the Moorish sovereigns.

The alert level for domestic terror has never been higher than it is right now, and the sad truth is a lot of it is tied directly to Russian active measures that have stoked civil war talk for more than half a decade.

Nobody was worried about Antifa or BLM etc, makes sense to me.

Last night it was 200 marching in Philly.

Who you crowed about getting their asses kicked.

Last night it was 200 marching in Philly. A couple days ago, it was a dozen anti-government “Moors” prepping for the Boogaloo right off the Massachusets I95

Old news, and they were refueling vehicles, not training.

Who you crowed about getting their asses kicked.

They FAFO and had to set off a bomb to escape.

Doing racist shit marching through my old home town, you’re gonna catch a beating at best, and lead if you earn it.