Until we stop buying their oil and gas, Russia will do as it likes to any non NATO country

The only thing that will stop Russia will be force or some form of collapse from within.

That nuclear deterrent is a bitch though

Russia’s gdp is equivalent to Spain’s, and while their military is no match for NATO, the nukes are doing their job, all the while Vlad doesn’t engage with any NATO countries

I prefer economic sanction, but unless it’s a complete boycott, they’ll are going to be ineffectual in the short to medium term

I did read about the Ukrainian MiG-29 pilot who supposedly shot down six Russian fighters in the last two days.

Becoming an ace in less than 48 hours is pretty fucking badass. Unfortunately, he’ll probably be dead by sundown.

I haven’t seen any good gunship footage yet, but I’m guessing there should be some awesome videos coming.

It won’t be as fun as watching Muslims get vaporized, but it’ll still be captivating, I’m sure.

Clearly plenty of people are buying it but no nation is buying it.

This is just a massive power grab, a war of annexation hiding behind the same casus belli language used in centuries of conquest.

Putin will never stop unless someone kills him.

You can console your self that they are eastern orthodox, which is nearly muslim

I thought we pick sides first and justify second anyway.

I am waiting to hear how somehow become liberals. 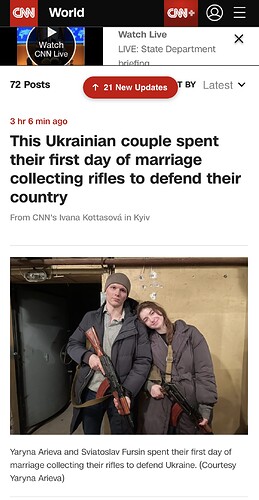 I would like to highlight what I consider to be some serious absurdity. Random untrained millennial fucktards scrounge up some weapons and probably half a dozen rounds of ammunition to go face a violent invader and the whole world calls them heroes.

I have years of training and enough weaponry and ammunition to arm my whole neighborhood, many of which are also experienced with weapons and have training. I can do this any day of the week and at a moment’s notice, should the need arise. But in the eyes of the world, I’m just a dumb redneck.

Not everything is about you. Princess.

Not everything is about you. Princess

My statement isn’t about me at all. It’s about the stupidity of liberalism. Literal fucking ass clowns. They have their heads up their asses about guns and pretty much anything that has to do with grown man shit, like protecting your own people. Yeah, no shit this could happen. No shit you could need to be prepared to fight. Fucking obviously. Bunch of goddamn limp dick fucking pussies.

Why would you care enough about what someone you thought was idiot thought about you…?

All bleeding heart faggots will learn their lessons sooner or later. If they don’t, their sons or grandsons will. Men who aren’t prepared to do violence are useless fucking creatures.

Looks like those Ukrainians are. Futile as it may look.

I wish them luck.

Yah well they are being invaded by a larger hostile trained military. But thanks for stating the obvious.

Also they have taken up arms so I don’t think you can say they are neutered. Those people have some gonads.

What they are doing is not to be admired. They’re acting out of pure desperation and they are acting largely in an ineffective manner.

They exemplify the phrase “Too little, too late.”

Lol wtf is wrong with you.

Of course they are desperate they are the loosing side of a war.

Idiot. Got any other hot takes you wish to share. Your hindsight and told you so approach should be on cable news.

What’s wrong with me is that I don’t heap praise on people for being easy targets.