Ever? People were out protesting the first set of guidelines and have been ignoring them since. This is why it is still a problem.

Countries not filled with window-licking willful rubes who think they know better than medical science, have had deaths in the double digits. They are out at baseball games and water parks.

They did the right thing off the bat, without whining like little bitches. I am tired of all the little bitches in my country who can’t be fucked to give a shit about their fellow Americans because they don’t feel any responsibility for them.

And, in the face of such willful disobedience, we are still a far cry short of what the projected deaths would be.

Look, I’m not saying that COVID is not a serious disease. Shit, I have a former shipmate that is in the hospital yesterday, and I’ve lost - depending on how we count - up to 5 family members.

My point, and to circle back to JP and other comedic looks at the phenomenon, are that we are often doing really stupid shit, including crashing our economy, and selectively imposing stupidity upon our populace.

Education? Out the fucking window. Not that it was great to begin with, mind you.

Make a living? Fuck that, Amazon will save you (via China, of course).

Elections? Pshaw. We can just deem somebody to have won, the ballots mean dick.

Riots are cool, though, you get to steal and/or destroy other people’s shit with a vengeance. They won’t be opening back up, anyways.

The riots weren’t cool either but at least those people were attempting to wear masks. If everyone just stayed the fuck home for 2 months, if right-wing media wasn’t busy telling people it was a hoax and a liberal conspiracy, we would have been done with this.

Fox News, and President Trump are responsible for over a quarter million deaths. And to some extent, so is this ginger fuck if he’s not making it clear that wearing a mask and social distancing are important.

He’s a comedian, not a public health official.

Fox News is an entertainment firm.

Trump is a reality TV star.

Why are you providing cover for this bullshit? You know millions of people take that shit seriously, you know it influences their behavior, and you know Americans are dead as a result of it.

I’m not providing cover. The mission is to make smart people, not to force media to be “responsible.”

We can make sure to start auditing JP’s jokes, though, so as to make less dead people. 1A be damned.

Holding people responsible for their behavior as a matter of social interaction is vastly different than requiring authoritarian intervention.

Shaming people for watching Fox News or listening to assholes like this guy doesn’t violate the non-aggression principle, and is another tool in the fight against bullshit ideas that get people killed.

Look, if you are a fucking idiot that runs with something a comic says as truth, you are probably on the short end of the Darwin Award runners-up list. Good riddance.

But, our job is not to stop comedy. It’s to educate people on the nuances and biases in their information sources, right?

The fact that someone has freedom of speech doesn’t mean they should be exempt from scorn or shame, much less celebrated for using that speech to get people killed.

So, this Chris Cavanaugh guy thinks JP Sears is serious? Or, you do?

He is a comedian. Seriously.

Also, Epstein did not kill himself.

Honestly I don’t know for sure either way, just brought him up because his name keeps coming up in our orbit.

Chris is a professor of Evolutionary Anthropology and has a podcast with a Psychology professor that covered him. We follow each other on Twitter, but I haven’t listened to the episode. 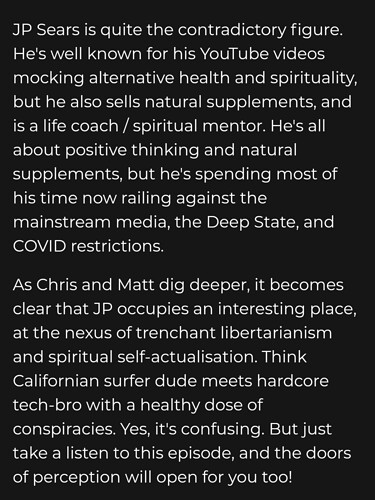 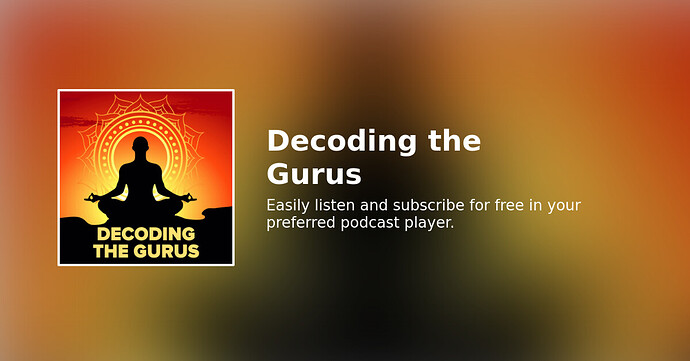 JP Sears is quite the contradictory figure. He's well known for his YouTube videos mocking alternative health and spirituality, but he also sells natura...

I mean, I think it’s a real problem that we may be sourcing our information from comics. They tell jokes, and those jokes are often based in reality, that’s what makes it funny, but if you are a fucking moron that sees anything other than a joke in the joke that the comedian is telling, you are at fault, not (s)he.

These guys are excessively fair and reasonable in their criticism of public intellectuals / “gurus”, but I haven’t had time to listen to the podcast, even at 1.5x.

How sad that they are debunking a comedian.

If he is a comedian that people take seriously as a source of information, which apparently they do, he doesn’t get immunity for his bad ideas.

This is like saying Trump supports Nazis, though, right?

At some point, you as an individual are responsible for what you do.

In b4 fire in a crowded movie theater…

Trump’s father was arrested at a KKK rally and he described guys marching in the streets with torches chanting literal Nazi slogans as “good people”.

So, that claim is not without merit, especially in a political climate where dog-whistling is rewarded.

Biden can form the Joke Police, when he takes office. I expect it in the first 100 days, in fact, or else… we will revolt.