S Korea followed textbook epidemiolgy protocols until 75% of the population were vaccinated. Although I think I’m right in saying S Koreans are much more trusting of aurthority than the US & UK populations.

I do think there is something here about how the health of society got cast as an individualistic political assault on freedom. A call jumped on my many “free thinkers” & conspiritualist preachers.

The whole thing emerging as a political pissing contest as opposed to an actual public health issue. 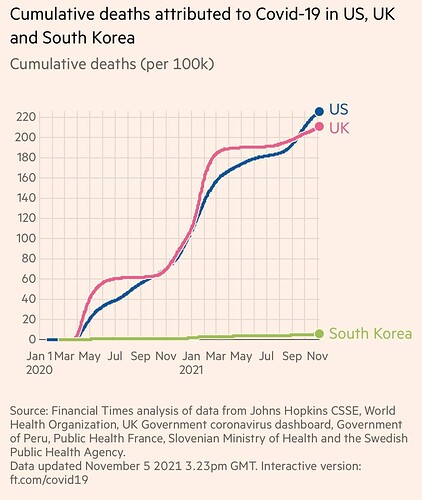 They did have some government restrictions, but not as much as many areas in the United States, did.

Korea did use widespread testing, contact tracing, and treatments.

The citizenry of those countries bow, rather than shake hands, already commonly wear masks, because of the widespread air pollutions that blows in from China, and because they have had pandemics before, more regularly, historically, compared to Western nations.

And the citizenry of those countries are much more likely to follow suggestions from authority figures.

It is also noteworthy, that those countries revere the elderly, culturally, and it is extremely unlikely that that the general public would consider it appropriate to take a view of, “this disease only kills old people therefore it is not my concern.”

On the other hand, there are also massive downsides to cultures that are overly authority figure driven, and Japan and Korea remain contenders for the most racist countries on the planet, have some fairly horrific rape cultures, and resultantly have some of the highest suicide rates in the world.

So, every culture has advantages and disadvantages.

They are selfish in different ways.

Have you ever spent any appreciable amount of time in Asia?

I think in this case our Western indivualism hasn’t really done us any favours. The hysterical “MAH FREEDUMS!!!” cries have muddied the water to such an extent that we have things like the Herman Cain Awards.

I think in this case our Western indivualism hasn’t really done us any favours. The hysterical “MAH FREEDUMS!!!” cries have muddied the water to such an extent that we have things like the Herman Cain Awards.

I have traveled to 35 countries.
You Err.
These freedoms that you mock,
Are not always present.
Take for instance, their opposite.
There are more, actual slaves in India today,
than were ever taken from African to the Americans, or the Middle East,
During the time of the transatlantic slave trade.
18 million in fact, real slaves in bondage, in India alone, one country, right now.
Where their owners can pull their teeth, or set them on fire, if they wish.
Don’t make light of freedoms.
People had to die so that others may have them.
Also, guaranteed, whatever device you are typing, on is slave cotton.
Freedoms…how lightly you take yours, and
The many people who are real slaves today,
-and there are more today than ever in human history-
yearn for even the smallest freedoms.

No mocking, I take my freedoms very seriously.

I’m merely pointing out that in some repescts our culture is sub-optimal.

A few months in Malaysia

I’ve seen a lot of docs about Japan

I agree freedom is the bedrock of any reasonable civilisation

However freedom and responsibility go hand in hand

Freedom without responsibility leads to decadence

Decadent parties are the best kind.

If you are not responsible with your freedoms you will loose them eventually. Like most precious things.

Not that I agree with doofa.

Not that I agree with doofa.

Methinks the lady doth protest too much

I haven’t protested anything since my early 20s

Do you protest against my accusations of too much protestation!

I think the lockdowns had more to do with not acting early enough and then panicking when shit hit the fan.
At least that was the case here.

We will see how things pan out as the vaccines are waning and the virus is mutating.

Some have said that the combination of allowing the virus to run its course and vaccinating as many as possible simultaneously will get a country closer to herd immunity sooner.

Only time will tell.

I just got back from Crete, had to wear a facemask in the airport at Crete then 4hrs on the plane and then through the airport in the UK before I walked through security and took it off.
I had a tickly cough the rest of the way home that was gone the following morning.
I am pretty sure that this was caused by the facemask which was a constant irritation given I had not had to wear one in the UK since July.
I dont know if they are effective or not but they do come with their own set of consequences that should not be dismissed or ignored.

but they do come with their own set of consequences that should not be dismissed or ignored.

What are the consequences?

I think we need fewer protestants…