Well, I didn’t go to Wyoming, y’all know that, Australia is locked down tighter than a fish’s butthole. But online I came across some massive claims on a video that were made by someone who DEFINITELY doesn’t have the skill level to back up the claims.

So I have been doing a little video series, similar to my deep dive into BJJ Mumbai/ Deepak Rao/ Seema Rao - at first it was just out of interest, the guy “coached” the Powell school Judo club from what I could see, but he made some massive claims about being a BJJ international champion and Judo legend. Couldn’t find anything on his name in either martial art, but I’m only Googling.

How do I find out if he is a Judo Black Belt? I seem to remember there was a register somewhere, but I can’t remember.

His videos are hilariously bad and the further I got into them the more I realised I hate this man because he is a fraud and is going to cause his students harm.

Anyway, the video series is coming out over the next few weeks, check it out, it’s me laughing at the techniques and execution and then getting mad at the screen because the “coach” Tim Waters, is clearly a charlatan.

Hey, I seemed to have missed this somehow.

Will check it out.

If it is the Tim Waters, I am thinking of, he is old as dirt.
I have not watched the video yet.

So not quite as old as dirt.

So not quite as old as dirt.

I hate to tell you this, old bean, but you are looking dirtier, every year, yourself.

Yeah, I feel like used dirt, that’s for sure.

So, Dangerous Waters MMA is not a club registered with the USJA or USA Judo, after searching their web sites. USJF doesn’t have any registered clubs in Wyoming. USA Judo has two.

Documenting claims. Maybe covered in Battlefields podcast stuff. have not watched all of them.
1.) “Olympic Judo Coach”. Claimed in 2018. That’s a tall order, right there. 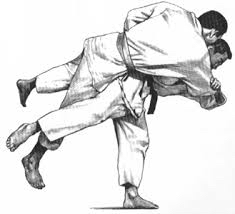 Sports are something almost every high school student will do at least once. Between all of the different sports spread throughout the seasons, there is bound to be something for everyone. But if you look beyond the school sports, you will learn some... 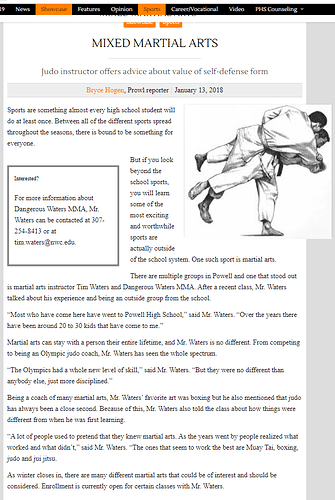 @battlefields seems to want the students to do randori harder in the training, with more resistance.
And wants to challenge the 60 year old guy training people out of his garage, to a fight.
It’s hard to know for sure, though because of the language barrier (battlefields is Australian).

It seems like @battlefields is taking exception to some of the judo techniques, and I’d guess some of the MMA type stuff going on at a small dojo in Powell, Wyoming.

The Judo stuff looks to me like fairly typical recreational level judo.

Some of the hype the instructor, Mr. Waters, is engaging in is a bit over-the-top, which is annoying, given the observed level of the Judo happening.

The screen capture I posted had a claim that Mr. Waters was an Olympic judo coach. I’d never heard of him, so I asked on the Dangerous Waters FB page. Mr. Baaken, the young man who is doing the Judo in the videos, promptly replied that was HIS mistake, that Mr. Waters had coached people who went to the Olympics.

That in and of itself is an interesting claim, because as we know, telling some 15 year old to pull harder and get lower probably didn’t contribute much to her making the Olympic team.

** I think the other issue is Mr. Baaken doing some instruction-type videos, and people are questioning that he should be doing that at his level of skill.

That’s a legit concern, of course.

Why would an Olympic trainer like DEEPAK RAO rip someone off? What the hell is wrong with you? Are you off your meds?

They’re not really investigations, just spelunkdunking on someone who is clearly not qualified to be teaching martial arts.

He has all the hallmarks of bullshido, including now his student making the “mistake” when he claimed his coach was a “Olympic Coach” when it was just that he coached someone who ended up going to the Olympics.

Jess Bakken is a TKD guy and his kicks are okay for a TKD. Not great, but okay. Tim Waters teaching him striking is fucking pathetic. It’s worse than pathetic. Arm punches, bob and weave like a 3 year old, simpleton level “combos”. The sparring is worse, with Tim getting the tiniest of knocks and going down then proclaiming that he taught that technique to the student and congratulating them for executing it so well.

And C.Gordon, I don’t want anyone to do anything regarding how they train, except if you are claiming you’re a white belt and that you’re throwing black belts, they better be fucking resisting otherwise your claim is disingenuous. Little kids throw black belts all the time when the black belt lets them. Nobody promotes those kids as having UNREAL THROWS BY WHITE BELT 5 YEAR OLD.

We all know I’d snap Tim Waters in half, I’m not challenging him to anything. The guy is 60, his arms are twigs, and his striking is shit, plus I outweigh him by at least double so even if he was good at judo I’d crush him.

I just want people to know he is a terrible coach and I hope people go somewhere else to train.

I just want people to know he is a terrible coach and I hope people go somewhere else to train.

Is Tim Waters even charging people?
If he is training people out of his garage, in particular, training rec students, how much harm is he really doing, and are what claims is he himself, making, that are really a juice is worth the squeeze situation?
Meaning, what is the consumer protection benefit versus just leaving him alone?
Is he taking people’s money or even charging?
is he sexually abusing people?
Is he claiming psychic powers?
Is he himself claiming credentials that he does not have?
The guy claiming he was an Olympic coach already admitted his mistake there.
You are your own man, I am not presuming to tell you what to do with your time.
I just don’t understand where the real fire is.

He has all the hallmarks of bullshido, including now his student making the “mistake” when he claimed his coach was a “Olympic Coach” when it was just that he coached someone who ended up going to the Olympics.

Guess who that “someone” was supposedly? Ronda Rousey. Yep, he supposedly worked with her in California, at West Covina Judo Club.

So I had looked him up and approached him in a friendly (genuinely so) manner. He right away, because of my profession (as posted on FB), accused me of attacking him because I’m helping the Sheriff in his county in some beef one of the deputies has with him.

I asked him some questions about his Judo career, like "hey, you did Judo in Texas right (claimed Texas State Champion). I’m from Texas, which club did you train at? Because he’s like, 1 year older than me, right?

No answer and he deleted the posts.

Yeah, I get it. My primary issue was as you point out, the dishonesty in the promotion material he was filming. That truly stinks of bullshido.

The Jess guy seems impervious to anything, though. I can’t figure out if he’s just dumb, or involved in the potential scam.

There is no registered (with any of the three national legit Judo orgs) Judo club in Powell, WY.

I have no way to look up Mr. Waters rank anymore unless I write
an email to all three of the national orgs.

I get someone is running fraud in the martial arts. What is the issue? This is what we do, ya?

I get someone is running fraud in the martial arts. What is the issue? This is what we do, ya?

Not much sport, in hunting tame ducks, with pliers, though.

Interesting qualifying questions, for me, are:

Everybody has to make their own decisions, about such things.

But, I usually don’t care about people who think they are better than they are, etc.

If for no other reason, that is most people, allowing that there are levels to such.