Scrapper again deconstructs the failures that lead to the latest major catastrophe befalling the United States, the how, why, and what the f

Hmm, the details on the fire extinguisher don’t sound right. Was the officer killed inside or outside?

No data yet. Reports from “witnesses” are that it was thrown. Police have a suspect but have released no details. I assume that is because they haven’t located their guy yet. Will amend as info emerges.

There was one outside that was grabbed early on in the fight, by the guy outside in camo hoody. He then asked who wanted to spray it on the cops. Passed it to the next guy who I don’t recall.

A bit of both. 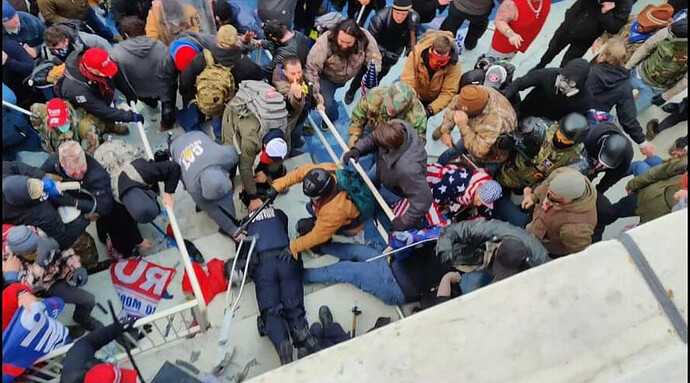 If you have that fire extinguisher guy on tape you need to give that information to the FBI.

He was a local, from Jersey.

Is that gallows humor?

I’m starting to worry about your mental health. None of this is funny.

You talk about sense of duty and then you laugh off the concept of contacting the fuzz regarding possible evidence in a historically significant murder investigation.

Do you have those guys on tape or not? If you do, I’m telling you that you needed to come forward as soon as you heard someone used a fire extinguisher on this murder. This is exactly the kind of shit the FEDS will need and you need to bring it to them yourself and not wait for them to call you. Best case, you didn’t see anything and it wasn’t the same guy. Worst case, you spent all day paling around with him and now the Feds want to stick their foot so far in your colon they invent a new dance move. If you can remember what the guy looked like and/or you have them on camera a guy would have to be a massive fuck up to not reach out to law enforcement with that information immediately and let them decide on how important it is.

This is deadly serious and you need to sober up from the high octane joy Dionysian Revel start thinking about 1) your duty to your country and 2) your potential duty to your self because cops don’t like it when people sit on potentially vital information. There has not been an arrest in the murder of that office yet to my knowledge, and even if there has been, you need to cover your own ass preemptively. I handle schedule 1 drugs all day and you better believe I don’t fuck around with sitting on the oh so incredibly incomparably minor paperwork SNAFU’s. Two kilograms went missing a while back on a shipment I was making to another licensed facility and the only thing that saved me from a massive fine was the fact I came to them immediately, showed all of my information and had absolutely every concievable duck in it’s proper row and column. This shit right here makes that missing 2kgs of dope look a fender bender at the Piggly Wiggly.

shrugs Law enforcement has no trouble finding me. I’m expecting them. They have some explaining to do. 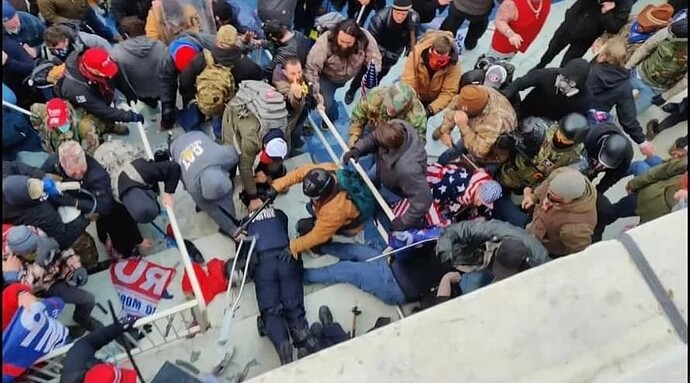 They’ll probably have questions of their own.

Not for me they won’t. I have no idea why they did that to themselves.

There’s video of it being thrown. I updated the article with links.

Turns out there are two fire extinguisher guys. The thrower has been arrested, but he is not the guy who killed Sicknik. Sicknick was beaten with one.

Lots of assholes in DC it seems.

Yeah, I posted that somewhere…

These people are fucking out of their minds.

There’s be 6 people still alive if the police had done their jobs and maintained order.

Or of the feds had done their jobs and stopped the attack that EVERYONE knew about.

You’re talking like this was out on social media a month or more ahead of the event. Tsk, tsk.

I literally had an investigations thread going a month ahead of this on Bullshido. Pretty much everyone that had hands dropped the ball. For the record, my being a wild dude doesn’t mean I give fake info. It means I give real info on wild shit.

That’s because they couldn’t see the ball

Because the ball was white

That’s not what happened. I can’t go into detail, but there were literally MAPS to the attack based on targeting whites.